Accroding to historians scones (or pogácsa in Hungarian) are one of the oldest biscuits that were already baked  in the time of the Hungarian conquest. Scones are small, round biscuits popular mainly in the Carpathian Basin and on the Balkans. Their name derives from the word focacea (baked dough), which is derivative of the Latin word “focus” that means fire. The word pogácsa was taken over from the South Slavic languages (it’s called pogača in Serbia, Croatia and Slovenia).

In Hungary scones are typically served as a welcome snack, cheese, crackling and curd cheese are the most liked flavours. Crackling scones are made of laminated yeast dough, which contains lard, ground or finely chopped cracklings, and seasoned with salt and black pepper. Folding is not as fiddly as you might think, it’s rather time consuming than challenging. The dough has to be folded three times, taking a 30 minute break between two foldings.

Buying cracklings doesn’t put us to great trouble as every butcher provides them in Hungary, but I know that availability in other countries isn’t obvious and getting hold of fresh cracklings could be an obstacle. But if you can obtain pork fat, you can make cracklings at home by rendering lard. 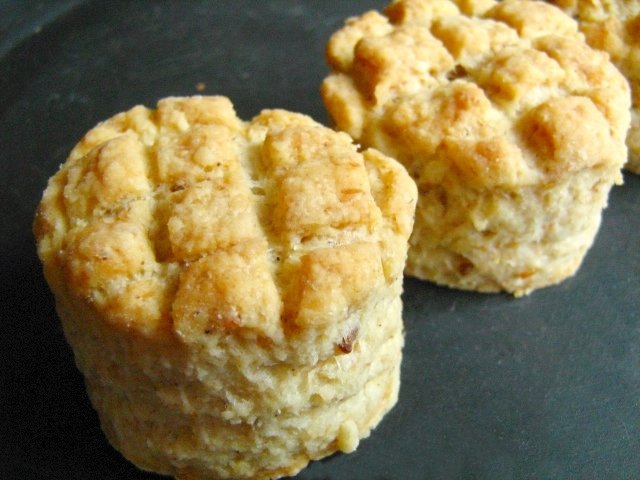 In lukewarm milk dissolve yeast with half teaspoon of sugar.

Sift the flour in a bowl and rub lard in with your fingertips. Add egg, sour cream, salt and activated yeast, and knead into a smooth dough until pliable and soft.

On a floured surface roll out the dough into a 5 mm thin rectangel. Spread ground cracklings evenly all over the top and sprinkle with black pepper.

Fold up the dough as you can see on the photos below. 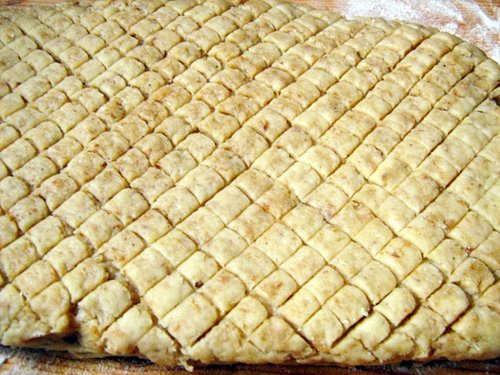 Cut out the scones with a small biscuit cutter. Reroll the dough scraps and cut more rounds. Place the scones on baking sheets lined with parchment paper. Spread the tops with beaten egg. Leave the scones to rise for 20 minutes.

Crackling scones are the best on the day they were made.