Lángos, this traditional Hungarian street food, is slowly conquering the whole world, the number of its fans is increasing day by day. Lángos is a fried dough that can be bought in every corner of Hungary, but it’s also available in the Hungarian-speaking regions of Romania, Slovakia and Serbia. Some assume that it appeared in the Hungarian kitchens during the Turkish occupation, according to other opinions it has an ancient Roman origin.

In the old times bread was baked weekly in almost every households, and a piece of bread dough was cut off to make lángos. Lángos was originally baked in rick-shaped oven with bread loaves together and it was served fresh for breakfast. After home bread baking had gone out of fashion, the preparation of lángos changed, and nowadays it’s deep fried in oil or lard.

Lángos is eaten fresh and warm with different toppings, the most popular ones are garlic-and-oil sauce, sour cream and grated cheese, but lángos can also be stuffed with sausages, mushrooms, ham or fried cabbage. Lángos can be bought mainly on the markets and in snack bars, but it can be easily prepared also at home.

A good lángos is light and loose, and in no way drenched in oil. My homemade lángos is smaller than usual, and different from the common lángos recipes as its dough contains potatoes and sour cream.  After the dough has risen, I roll it out 1/2 inch thick, and with a water glass I cut out the circles. I stretch out each piece with my fingers into a round lángos shape, with a centre being thinner than the edges. 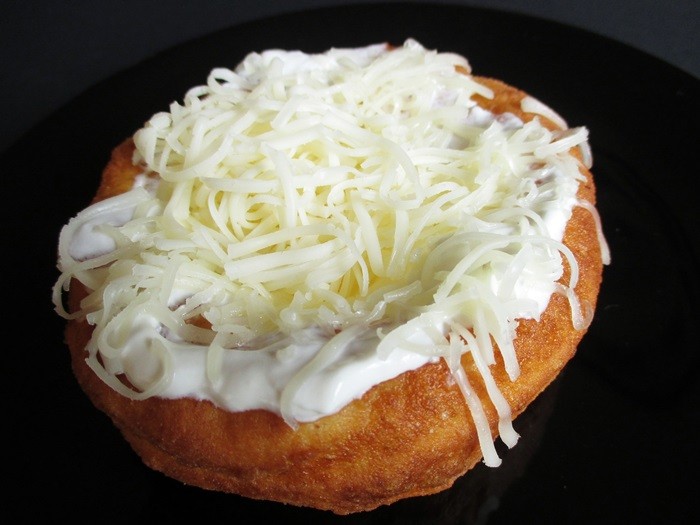 Place the potatoes in a small pot, cover with water and cook until tender. Drain and mash the potatoes. Set aside and let it completely cool.

Place he flour in a bowl. Add crushed potatoes, activated yeast, egg, sour cream and salt. Knead until the dough is smooth and no longer sticks to the bowl. Cover and in a lukewarm place let the dough rise until it doubles in size.

Turn out the dough onto a floured surface, and roll it out 1/2 inch thick. With a big water glass cut out circles, and let them rest for 10-15 minutes. Meanwhile heat the oil in a deep skillet. Drop in a small piece of dough to check its temperature.

Stretch out a piece with your fingers into a round lángos shape with the centre being thinner than the edges. Place the lángos into the hot oil, fry it on one side until golden brown, then turn it over and fry until both sides are nice golden. As soon as a lángos is placed in the hot oil, quickly flatten out the next piece of dough. Remove lángos from the oil and place on paper towels.