Aranygaluska is a Hungarian Jewish dessert, generally baked for Purim. The name aranygaluska literally means “golden dumpling” and by the 1880s, this dessert was being referred to in Hungarian literature. Hungarians who immigrated to the US brought this dish with them, which became popular nation-wide when Hungarian and Hungarian Jewish bakeries began selling it in the middle of the 20th century. The recipe for aranygaluska, which was referred to “Hungarian Coffee Cake”, was published in the United States in 1972, by Betty Crocker. Nancy Regan popularized this dessert when she served it in the White House for Christmas.

Aranygaluska is often confused with monkey bread, in which the balls of dough are not dipped in ground walnuts and sugar, but only in butter. Aranygaluska consist of balls of yeast dough that are dipped in melted butter, and then rolled in a mixture of sugar and ground walnuts, assembled into layers before being baked till golden. It’s usually served with vanilla custard, but Jews eat it with white wine apple sauce. 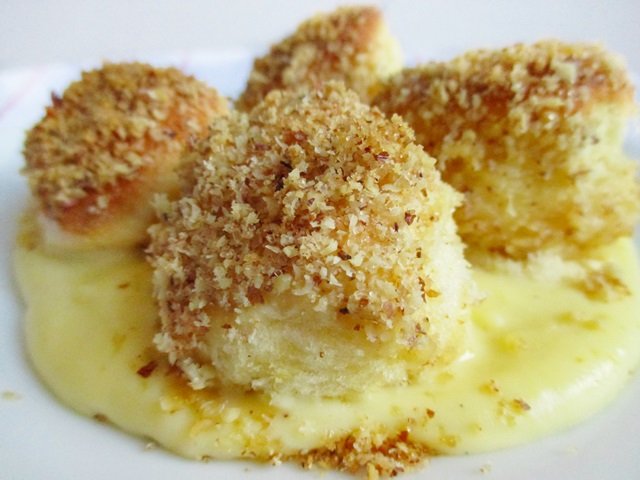 Dissolve yeast with sugar in lukewarm milk. Sift the flour in a bowl, add lemon zest , salt, egg yolks, butter and activated yeast, and with a mixer knead into an airy and very soft dough. Cover and in a warm place let it double in size (it takes about 40 minutes). 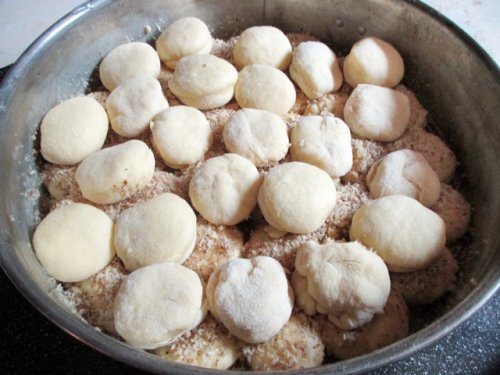 Butter a round cake pan; set a small bowl of water on the oven floor and preheat the oven to 180ºC / 356°F. Turn out the dough onto a floured surface, roll out 2 cm (1 inch) thick and with a small cutter cut out balls. Reroll scraps and cut out more dumplings. To make the first layer, place balls into the prepared cake pan leaving some space between them (dumplings will rise during the baking process). Spread them with melted butter.

Combine ground walnuts and sugar, and scatter on top of the dough balls. Now comes the second layer of dumplings, brush melted butter on tops and sprinkle with ground walnut. (When the balls are prepared, I immediately slide them into the preheated oven; it’s not necessary to let the dough rise for the second time, but you can leave it to rest if you want.) Bake for 35 minutes or until golden brown on the top. 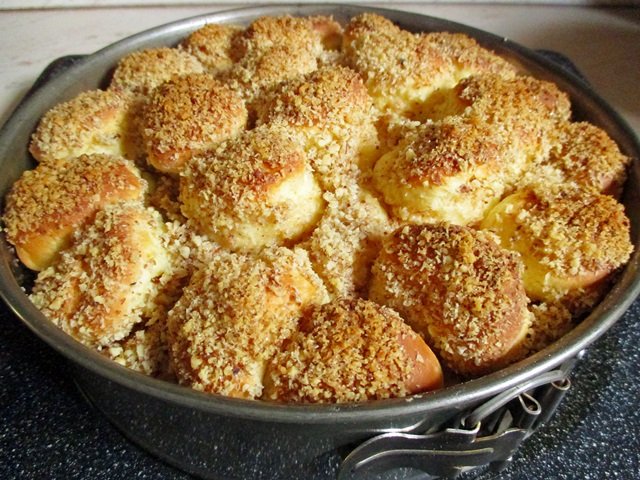 For the custard combine egg yolks, sugar, flour, vanilla and rum, then add milk in small batches and whisk until lump-free and well combined. Over medium heat cook, while stirring constantly, until slightly thick.
Once the dumplings are done, serve warm, in “pull-apart” style, with the custard. This dessert is best out of the oven, but it will be still delicious when it cools to room temperature.