Sweet chestnut (Castanea sativa) belongs to the family of beech species and it’s unrelated to water and horse chestnut. Originally native to South-Eastern Europe and it has been grown since ancient times. The Romans planted chestnut trees across Europe to harvest their edible crops that was an important part of the Roman diet (roasted or ground into flour). 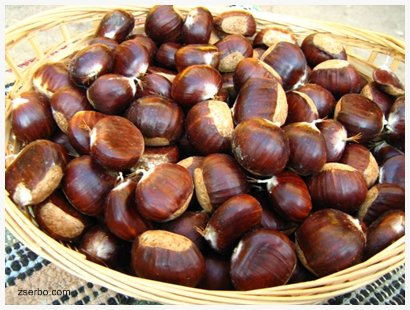 Chestnut tree is a very useful plant. The tree can grow to 30 meters tall and it is one of the longest-lived trees. 200-300 year old trees are not rare, but thousand-year-old chestnut trees are also recorded. It bears its first crop at 20 years of age. Its flowers are rich source of nectar, the sweet chestnut honey is a special delicacy. Europe’s largest chestnut-growing areas can be found in Italy (Mugello region – north of Florence) and in France (in the neighbourhood of Lyon). In Hungary there are extensive plantations in the Sopron mountains, Zala Hills and on the southern slopes of Börzsöny.

Chestnuts are nutritious and delicious fall and winter treat. They can be boiled, steamed and, of course, roasted over an open fire. In Hungary Queen Beatrix (wife of king Matthias) spread the Italian chestnut recipes in the 15th century, capon with chestnut was the favorite dish of the king. On those places where the soil was unsuitable for cultivation, for the families chestnut replaced grains and potatoes.

Chestnut puree is a very popular dessert in Hungary. It has its origin in France, called Mont Blanc that refers to the huge pile of whipped cream reminding the snowy mountain. However, Mont Blanc is a copy of the Italien Monte Bianco. Monte Bianco’s recipe already appeared in a cookbook printed in Florence in 1475. Later it was a common dessert on Cesare and Lucrezia Borgia’s table. It spread in France around 1620.

Chestnut puree is a little bit complicated to prepare it at home if you use real chestnuts and not chustnut paste, but the final result compensates your efforts.

Wash and clean the chestnuts, then with a sharp knife cut an “x” on the curved side of each shell.

Preheat the oven to 120 °C, set prepared chestnuts in a roasting pan and pour 100 ml water into the pan (steam makes the shells open faster and nuts won’t be dry). Roast until the shells opens up by curling back, for 30-40 minutes.

Pull and snap off the shells while they are still warm, being sure to also take off the skin between the shell and the chestnut. If you don’t manage to remove the inner skin, drop the chestnuts into boiling water for a few minutes, and as long as they are hot, you can peel them easily. 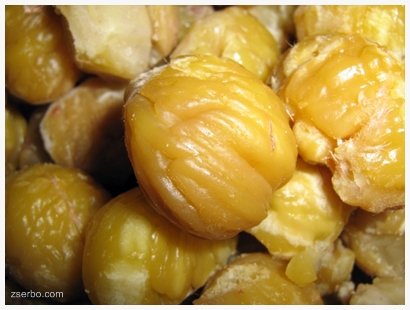 Set the chestnuts into a large saucepan and bring water and milk to cover them. Add the vanilla seeds and also the pod. Cook under cover on low heat for approx. 45 minutes or until chestnuts get completely soft. (Cooking time depends on chestnut’s quality.)

Drain the chestnuts (most part of liquid boils away) and put them into a food processor. Add sugar, salt, melted butter, cream and white rum and mix them until well combined. Put the paste into the fridge for at least 3 hours.

Press the puree through a potato ricer and serve it with sweet whipped cream. 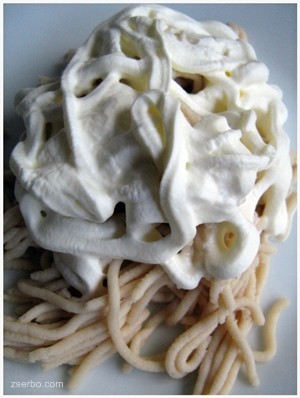