Today recipe is a delicious pork dish named after the Transylvanian town, Temesvár or Timisoara; it was part of the Austro-Hungarian Empire, now the third biggest city of Romania. This dish is basically a pork stew with yellow beans, thickened with a flour-sour cream mixture.

Its Hungarian name is temesvári sertésborda, which translates as pork ribs, but in this case we use boneless pork loin slices that are pounded and pre-fried in lard. Bacon is a compulsory ingredient, it gives a fine smokey flavour to the dish and this is what makes it a Szekler dish.

This stew differs from pork paprikash in one thing, namely it contains fresh wax beans. If they are not available in your place, you may add green beans, the flavour will be a bit different, but still amazing. If you use frozen beans, be careful about the amount of water because frozen beans also give off some liquid. 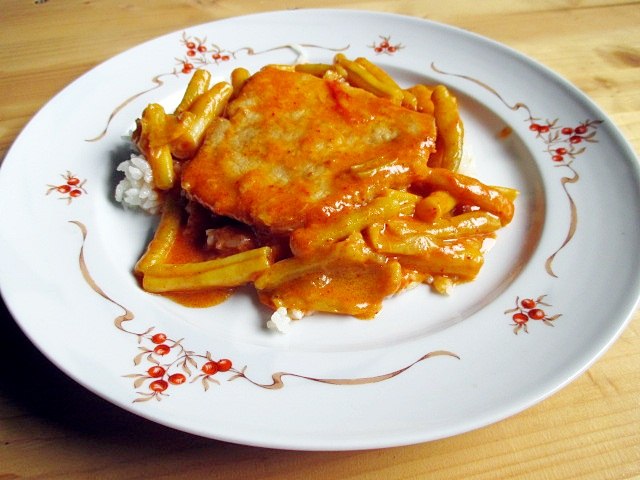 Pound out the pork loin slices very thin. Salt and roll the slices into flour.

On medium heat, pre-fry the slices in lard or oil. Transfer them to a plate.

In the same pan you used for pre-frying fry chopped bacon until it’s cooked through.

Sprinkle with paprika and salt, then add trimmed and cut yellow beans, tomato dices and wax pepper slices. Give it a stir, place the pork loin slices on top, and pour in water, just enough to cover 3/4 of the food. Bring it to a boil and slowly simmer, uncovered, until wax beans and pork slices are tender.

In the meantime combine 1/2 cup of water with 1 tablespoon of flour and 2 tablespoons of sour cream.
Pour the mixture into the stew (add more water if it’s needed) and cook for further 3-4 minutes.