Although winter is coming, we don’t even need to give up on fresh salads during those frosty months. There are some seasonal vegetables that can be base material of exciting, sometimes unusual salads. One of those winter veggies is celeriac.

In Hungary celeriac is more popular than celery. The huge roots keep long (approximately six to eight months) if stored in a cellar and not allowed to dry out. Ideally, its texture is neither woody nor spongy, but solid, springy and crispy. Celeriac – along with parsley – is one of those herbs that have strong diuretic effect. It stimulates the renal function, the plant’s active ingredients strengthen the immune system. It’s often applied in case of dysorexia and indigestion.

Celeriac usually occurs as an ingredient in soups, casseroles, and other savory dishes, but it’s very rarely eaten raw, which is wrong, because its healing power can only be the most effective if we don’t cook it. In this celeriac salad the flavour of the apple and the carrot deadens the characteristic taste of the celeriac, so hopefully those who have fears of its strong aroma will also enjoy this simple, but great fresh dish. 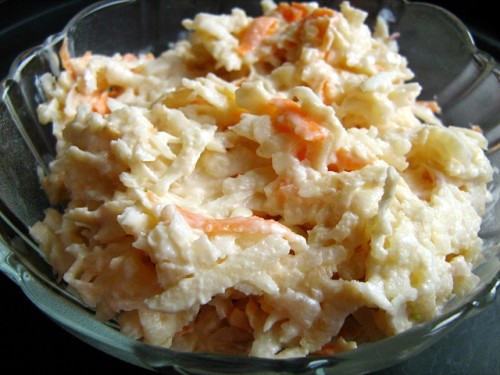