There are several layered dishes in the Hungarian cuisine, they are usually made with some kind of meat and vegetable like potato, sauerkraut, kale or cauliflower. Cauliflower is very popular in Hungary and often served in canteens or in the lunch menu of restaurants. If it’s not breaded, which is the most frequently used preparation, cauliflower is generally cooked as a soup or as a layered dish.

The traditional layered cauliflower consists of minced pork, rice, sour cream and cheese. My recipe is a lighter version containing ham and cheese and covered with bechamel sauce. Good news for low carbohydrate dieters that cauliflower is low in fat and in carbohydrates, but high in dietary fiber, folate, water, and vitamin C, possessing a high nutritional density. 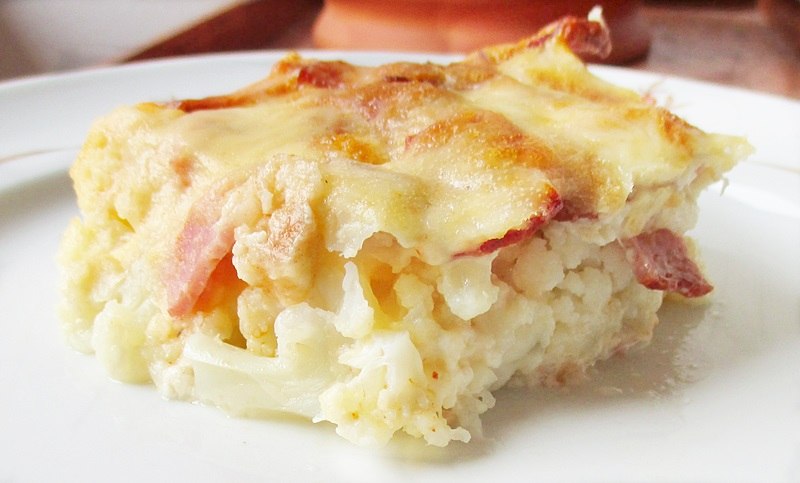 Cut the cauliflower into small florets and cook in salted water until just tender.

Toast 2 tablespoons of breadcrumbs in a dry pan. Set aside.

Cut the ham into small pieces and stir-fry in a small amount of vegetable oil for a couple of minutes until bit golden. Set aside.

Grease a pan and dust with 2 tablespoons of untoasted breadcrumbs.

Put half of the cauliflowers in first layer, then add fried ham and scatter toasted breadcrumbs over top, then cover with another layer of cauliflowers.

Make the béchamel sauce. In a medium saucepan heat the butter over medium-low heat until melted. Add the flour and stir until smooth. Cook just until the raw flour taste is gone and it begins to bubble; roux reaches the white stage.

Meanwhile, heat the milk in a separate pan until just about to boil. Add the hot milk to the butter mixture, whisking continuously until very smooth. Bring to a boil. Cook, stirring constantly, until it thickens. Turn off the heat, season with pepper and nutmeg, then stir the grated cheese into the hot sauce.

Pour the white sauce over the layered cauliflower and place into the oven preheated to 180°C. Bake until top is golden brown.