The Latin phrase in the title that first appeared in the Book of Job and everyday language took over it from the Bible is the attributive and also the name of our today cookie at the same time. Its word-for-word English translation is nothing further beyond, figuratively it means something unsurpassable, second to none.  Of course, there is no question that this cookie doesn’t embody the non plus ultra for everyone, but it’s a fact that there is no other food known by that name.

Its recipe was first published in the most popular Hungarian cookbook of the 20th century written by Ilona Horváth in 1955. The target audience of her cookbook was the group of those women who worked and managed the household, as well and who had less time to cook, but wanted to prepare modern and nutritious dishes.  Among the popular dishes you can find several specialties, one of them is Non plus ultra, a typical cookie of the period wedding dessert repertoire.

Making the cookies requires some manual skill, bit it’s far from difficult. The dough is similar to linzer, but the disks are topped with sweet whisked egg whites, which complement the slighlty sour taste of the apricot jam perfectly. 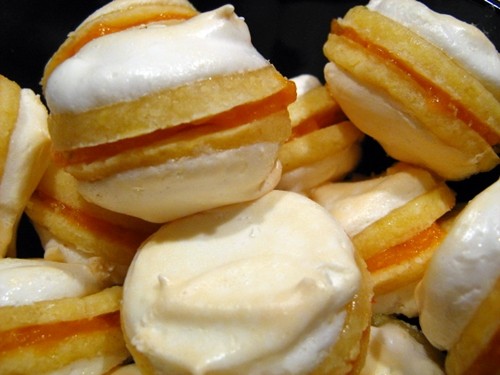 Sift the flour in a bowl. Add sugar, salt and butter cut into cubes.
Seperate the eggs; set aside the egg whites. Beat the egg yolks with one tablespoon of milk and add to the flour.
Knead with quick movements until the mixture becomes a slightly stiff dough.
Shape the dough into a ball, wrap in plastic wrap, and refrigerate for an hour.
Preheat the oven to 160°C / 320°F.
Line two baking sheets with parchment paper.
Whisk the egg whites with sugar until soft peaks form.
Roll out the dough to 2 mm thickness on a well floured surface.
With a 4 cm cookie cutter, cut as many circles from the sheet as you can. Knead the leftover scraps of dough into a ball and roll it out again. Cut out more circles. Repeat the rolling and cutting process until dough runs out.

Arrange cookies on prepared baking sheets, leaving about 2 cm of space between them.
Put 1 coffee spoon of whisked egg whites on each disk. 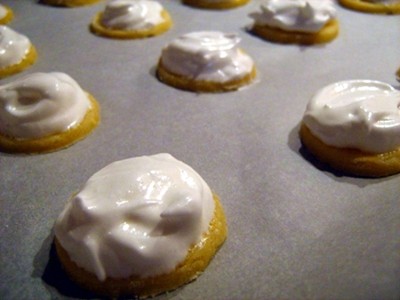 Bake cookies for 10-12 minutes. Cool on wire rack.
Spread the disks with apricot jam to glue them together.