Hungary is literally a large and contiguous game preserve, where most of the game stock lives free, in their natural surroundings. The country, therefore, has an outstanding role in the European hunting tourism. Roe deer is one of those game species that can be found in large numbers throughout the country. The hunting season of roe bucks (males of the species) begins on the 15th April, when the antlers are already glossy and the crops don’t hide them.

We got a big cut of wild venison (roa deer) from our friend, which was cooked for a party last week. The amounts in the recipe are enough for 6-7 people, so you may reduce the quantities proportionally. I’m a huge fan of venison, a first-class meat that is better than beef in my opinion. Venison is particularly rich in iron and B vitamins, and thanks to all the wild food that deer eat, the small amount of fat in venison contains high levels of conjugated linoleic acid, which is thought to protect against heart disease and cancer.

Venison is very lean, so it’s recommended to add extra fat to keep it moist. As wild games don’t carry their birth certificate, cooking time can only be estimated: wild meat usually takes 3-4 hours to become tender. Because of the long cooking time stew meat shall be cut into 3-4 cm/1,5 inch chunks, so the meat will have the right size by the time it’s done.

The flesh of a shot animal is usually bloody, containing smaller or bigger pieces of clotted blood. There is two ways to get rid of blood: you can soak the meat in cold water for 1-2 hours before cooking, or you can parboil the meat. In this case place the meat chunks in a pot of cold water, bring it to a boil and cook for 2-3 minutes until grey scum appears on the water surface. Drain and rinse the meat, and discard the cooking liquid. 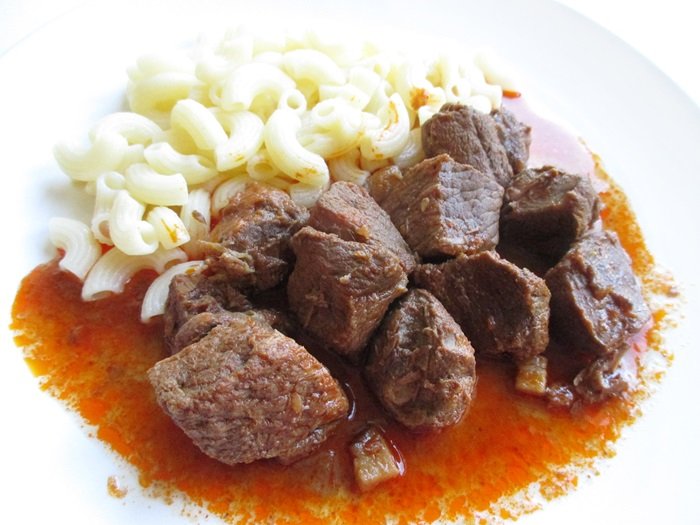 Remove membranes and sinews from the meat, then cut into 3-4 cm / 1,5 inch chuncks. If the meat is bloody, soak in cold water for 1-2 hours, or parboil it.

Heat a large pot on a high heat, add chopped bacon and fry until crispy. (I used mangalica bacon that releases enough lard to sauté the onion, but if you find your bacon lard too little, add more lard or oil if needed.) Add finely chopped onions and – a few minutes later – chopped garlic, and sauté until translucent. Add meat and fry for a few minutes to brown a bit.

Remove the pot from the heat, sprinkle with paprika, add caraway seeds and allspice corns, and pour in the red wine. Return to the heat, add salt and water, just enough to halfway cover the meat. Over medium heat cook, stirring regularly, until tender. During the cooking process you’ll have to add more water because venison is a very dry and lean meat that soaks up a lot of liquid. Once tender, serve with noodles or boiled potatoes, and with pickles.