Dödölle, ganca, gánica, cinke – all these names refer to one dish that is known and cooked throughout Hungary, a cheap peasant food that was eaten on a daily basis a long time ago. Dödölle means potato dumplings fried with onions in lard. The list of the ingredients is short: potatoes, flour, salt, onions and lard – that’s all you need to make dödölle.

Potatoes are covered with water and cooked until soft. The cooking liquid isn’t discarded, potatoes are mashed in it. Mashed potates are combined with flour and salt, and cooked until the mass thickens. The mixture should be stable, but yet sticky. Dumplings are usually shaped with two tablespoons, and fried along with sautéed onions; not separately as some recipes advise falsely. Dödölle can be served as a side dish of roasts, or as a main dish; in the latter case you can top the dumplings with dollops of sour cream and/or clumps of sheep’s milk cheese. 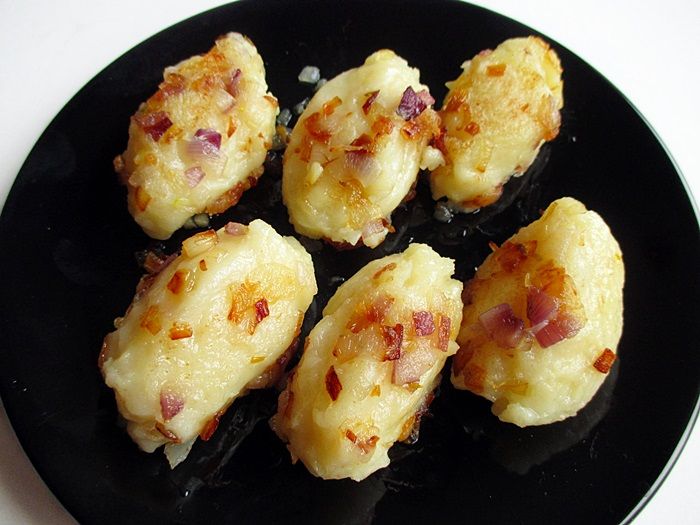 Place the potatoes in a smaller pot and add water, just enough to cover them. Bring it to a boil and slowly cook uncovered until tender. Once tender, remove potatoes from the heat, and mash them in the cooking liquid. Return to the heat, immediately stir in flour and salt, and cook, while stirring constantly, until the mass thickens. (Feel free to add a little more flour if the potato mixture doesn’t get thick enough.) Turn off the heat.

In a non-stick pan heat the lard, add finely chopped onions and start to sauté them. Once onions are translucent, with the help of two tablespoons form dumplings from the potato mass and carefully slide them into the hot lard. Fry them  until all sides are golden brown. If you serve dödölle as a main dish, add dollops of sour cream.