Due to its attractive deep green colouring and crinkly leaves savoy cabbage popularity has never waned. Savoy cabbage is a very versatile brassica, its flavor is mild and earhty, and the leaves are tender even when raw; therefore, it can be prepared and cooked in several ways.

Savoy cabbage is named for the Savoy region, a medieval duchy on the border of Italy, France and Switzerland. It’s believed to have originated from England and Holland, though savoy cabbage prefers dryer and cooler climates. Its favored climates are in Northern France and Northern Europe.

Savoy cabbage is high in vitamin K and vitamin C. It’s also a very good source of fiber, manganese, folate, vitamin B6, potassium, and omega-3 fatty acids. It cooks quickly and easily and it doesn’t have the usual odor associated with overcooked cabbage. 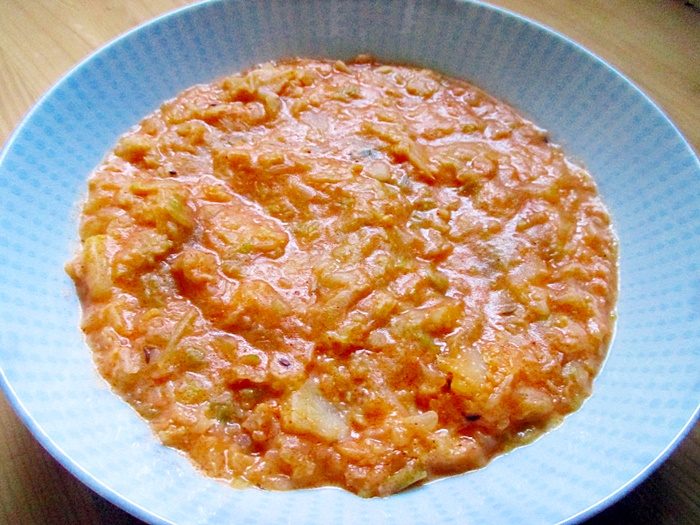 Place shredded savoy cabbage and diced potatoes in a pot and pour in water, just enough to halfway cover the food. Add salt, pepper and caraway seeds, and cook until soft and tender.

In a saucepan heat the lard over moderate heat, add flour and make a blonde roux. Turn off the heat and stir in finely chopped garlic and paprika. Set aside the roux and let it cool.

Once cabbage and potatoes are tender, combine the cool roux with some hot cooking liquid, pour it to the cabbage and cook for further 1-2 minutes. If you find the stew too thick, feel free to add more water. Turn off the heat and stir the sour cream into the stew.