Apple has been accompanying the history of humanity, there are only a few fruits that have such a long past as the apple. Apple’s story dates back to the Stone Age, European folks already dealt with apple-growing at that time. The Greeks and Romans continued this tradition and during their conquests the fruit got through to remote areas, too. Apple is now cultivated worldwide, the annual quantity of the crop is about 60-80 million tons.

Apple is one of the most important vitamin and mineral resources during the autumn-winter season, many beneficial health effects result from eating it. It’s best to eat it raw, but apple is often used as an ingredient of desserts. Though cooking reduces its mineral and vitamin content, but it doesn’t diminish apple’s enjoyment value. A good example for this is apple pancake rings.

I like apple pancake rings much better than plain pancakes. The apple’s sourish taste and the sweet pancake coat is a heavenly combination. You have to make a much thicker batter than usual to be able to coat the apple slices, but the batter has to drip off a bit. These pancakes are best eaten right away. You can keep them warm in the oven but they are best right off of the pan. 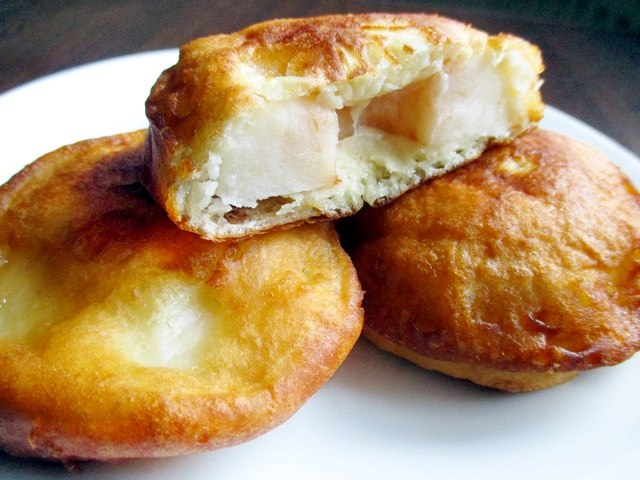 Mix flour with baking powder. Separate the eggs. Whisk together egg yolks, sugar, salt, lemon zest, rum and milk. Once well combined, whisk in flour and stir until evenly mixed. Beat the egg whites to stiff and gently fold into the batter.

Core the apples, peel and cut them into 1/2 inch slices. Heat up oil in a skillet. Dip each apple slice into the pancake batter, lift them out allowing the runoff to fall back into the bowl and then transfer the apple slices to the skillet. Over medium heat fry both sides of the rings until golden brown. Transfer the cooked apple rings to a bowl lined with paper towels.