We are a crepe eating nation. I have met nobody who isn’t fond of those beautiful paper thin pancakes. They can be sweet or salty, rolled up, layered or folded into quarters, filled with walnut, jam, curd cheese, nutella or cocoa – we actually love them all. But there is one, which aquired fame beyond the frontier. It’s the elegant Gundel crepe – the classic dessert of the legendary restaurateur Gundel dynasty.

Like all famous dishes, these crepes also have their own legend: a banquet following the premiere of a Márai play was held at the Gundel restaurant, and Lola Matzner, Sándor Márai’s wife gave her family crepe recipe to Károly Gundel to make it for this occasion. The crepes achieved success and Károly Gundel put them on the menu as Márai crepes. But after the writer and his wife had emigrated and become persona non grata, in the meanwhile nationalized restaurant the dessert was renamed after Gundel.

Gundel crepes are filled with rum-walnut filling, fried in butter and served hot with warm chocolate sauce on their tops. They are generally folded into quarters, but I prefer to roll them up. According to the original recipe crepes don’t have to be flambéed, because it would reduce the taste of rum. The recipe asks for finely chopped walnuts, but in order to make the filling a bit creamier, I grind half of the walnuts, the other half is chopped finely. 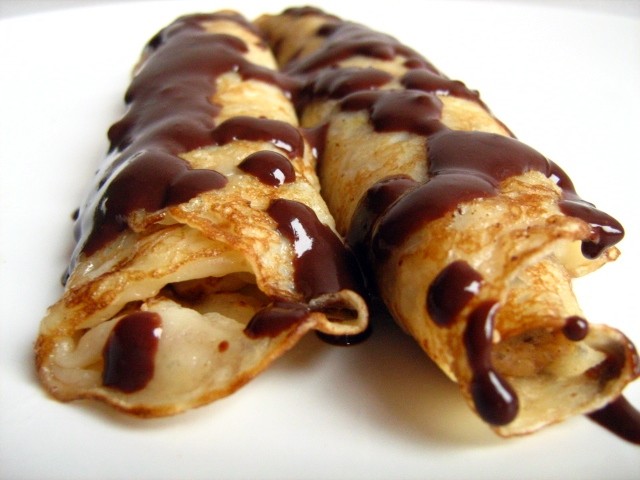 Ingredients:
For the crepe batter (it makes 10-12 pieces):

For the chocolate sauce:

Place eggs, sugar, salt, lemon zest and vanilla in a bowl and beat until well combined. Gradually add flour, then milk and soda while continuing to beat. When the batter is finished, stir in two tablespoons of vegetable oil. (If you mix oil into the crepe batter, you only have to put oil in the pan before frying the first crepe, after that between two crepes you don’t need to grease the pan.) Refrigerate the batter for at least two hours before frying.

Soak the raisins in lukewarm water.

Grind half of the walnuts, the remaining walnuts should be chopped finely.

Prepare the filling. In a sauce pan bring cream and sugar to a boil, then add ground and finely chopped walnut, rum, cinnamon, orange zest and raisins while stirring continuously. Over low heat cook for 2-3 minutes. If it’s too thick, you may add more cream. Turn off the heat and let the filling cool.

Fry up the crepes in a crepe pan. When all the crepes are ready, spread with the filling and roll them up.
For the chocolate sauce melt milk and dark chocolate in a metal bowl set over a pot of simmering water. Remove from the heat and quickly combine with the egg yolks using a flat egg beater. Add sugar, cocoa powder, butter and rum, and stir until well combined. Put back over simmering water and warm the sauce for 5 minutes. Turn off the heat. If the sauce is too dense, you can dilute it with milk.

Melt 60 grams of butter in a non-stick pan and fry all the filled crepes on both sides until golden brown.
Place two crepes on the plate and pour a little hot chocolate sauce on the top.