Hungarian cream puffs are so amazing and splendid, much better than profiteroles or éclairs; I always make them for Christmas. They are called képviselőfánk in Hungarian, which literally means “representative’s doughnut”. Officially the origin of képvislőfánk is wrapped in mystery, but according to a legend these cream puffs were served for the members in the buffet of the Parliament in the 19th century, and this is reason why the word representative is mentioned in their Hungarian name.

Képviselőfánk is made from a light and crispy choux pastry, which contains water, egg, salt, flour and either butter or lard. I prefer to use lard – it suits my taste better, but, of course, you are allowed to use butter, too. It’s very important to bake the pastries in a steamed oven – steam helps them rise and become crispy and airy. Don’t open the door during the baking process because the shells can collapse.

I know from my own experience that the 20-30 minute baking time most recipes usually suggest isn’t enough to reach the right consistence, my pastries always collapsed after I had taken them out of the oven. Choux pastry must be baked well to ensure that the interior walls are dry, therefore, after several attempts, I stick to baking them for 40 minutes (don’t worry, they don’t burn), so the shells retain their beautiful puffed form even after they are cooled.

Hungarian cream puffs are filled with pastry cream and whipped cream. Pastry cream or crème pâtissière is a thick and stable custard, which is usually made with either flour or cornstarch. Virtually I use the recipe of krémes filling for the cream puffs, too, I just half the quantities. My filling differs from the traditional pastry cream in one thing, namely I always fold whipped egg whites into the cream. 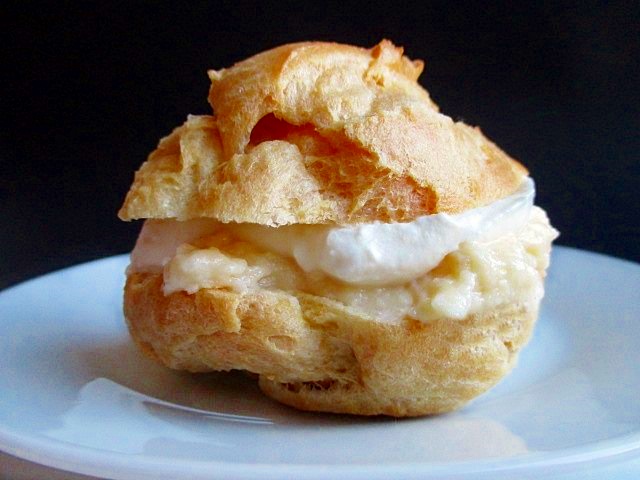 In a large pot, bring water, salt and lard to a rolling boil. Stir in flour until the mixture forms a ball. Turn off the heat and using a mixer or wooden spoon, beat in the eggs one at a time, mixing well after each until the egg is fully incorporated. Spoon the dough into 18-20 piles onto a baking sheet lined with parchment paper, leaving lots of room between the dough piles for expansion. Let them rest for an hour at room temperature.

Set a small pan of water on the oven floor and preheat the oven to 200°C. Bake the pastry puffs for 20 minutes, then reduce the heat to 180°C and keep baking for further 20 minutes. Don’t open the door during the baking process or the pastry will collapse. Transfer the shells on a wire rack and let them cool completely.

Separate the eggs. Place flour, sugar, lemon zest, vanilla seeds and 5 egg yolks into a saucepan, and whisk together while adding milk in small batches. Over medium heat cook until the pastry cream thickens. Remove from the heat, immediately add butter and stir until it melts and fully incorporated. Whisk the egg whites until stiff peaks form and gently fold into the hot pastry cream. Let it cool.

Whip cream with 2 tablespoons of powdered sugar to soft peaks.

When the pastries are cool, split and spoon vanilla cream in the middle, then pipe or spoon the whipped cream on top of the vanilla cream. Place on the tops.

You often ask me what kind of cottage cheese I use in the recipes. In Hungary the store-bought cottage cheese is dry and crumbly as you can see in the picture. So if a recipe calls for túró, I mean this type.