Szaloncukor is a traditional Hungarian Christmas candy, a real Hungarikum which means that this candy is special, unique and only characteristic of Hungary. It was originally made of fondant, covered by chocolate. It’s wrapped in shiny coloured foil, then hung on the Christmas tree as decoration by using strings or small metal hooks. The candy‘s name comes from the German Salonzuckerl and its literal translation in English is parlour candy because the Christmas tree usually stood in the parlour.

The French started to make the ancestor of this fondant dessert in the 14th century. Its recipe was spread in Hungary when German craftsmen migrated there in the 19th century. German wealthy families erected Christmas Tree in the entrance hall of their homes and decorated it with sweets wrapped in shiny paper. The whole manufacturing procedure was manual until the first fondant-machines appeared at the end of the 19th centrury. These steam powered machines worked in the chocolate factory of Frigyes Stühmer and produced the popular candies for Café Gerbeaud. The last part of the procedure to be mechanized was trimming the end of the papercover with fringes. 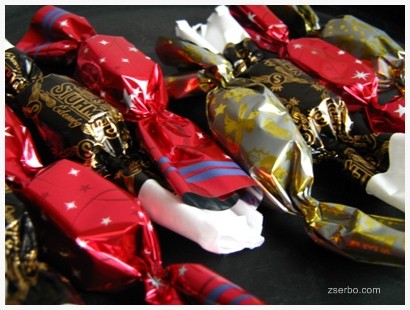 The most famous pastry shops produced a large amount of candies before the holidays, using 25 to 30 kg of chocolate per day. Forms were dipped into sifted rice flour and liquid fondant was poured in these cavities. When the fondant set and dried, candies were packed in tin foils. At this time paper mills provided a wide range of tin foils, nearly 1000 varities were available. Of course, there were people who couldn’t afford to buy szaloncukor in the confectionaries, so many of them prepared it at home.

Mass production of these candies begun at the turn of the century. The industrial products didn’t win the housewifes’ approval at the beginning, however, the graded improvement of quality, appealing packing, large selection and lower prices quickly convinced the customers. Confectionaries made only special hand-made candies. 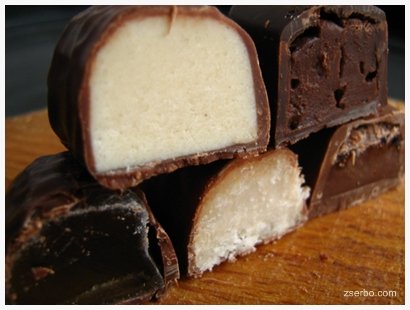 Between the First and Second World War the production of industrial fondant candy significantly reduced as poverty was widespread. This period forced families to make the Christmas tree decorations on their own. In the ’50s mass production gained ground again. Now there is a wide variety of different kinds of candies, including jelly, coconut, hazelnut, and lots of other flavors that meet the requirements of each class of society.