The Hungarian isler filled with royal icing (habos isler), apart from its shape and the chocolate glaze, has nothing to do with its namesake, the traditional Austrian ischler. This cookie is a rarity from Szolnok, a town that lies at the confluence of the Tisza and Zagyva rivers, in the heart of the Great Hungarian Plain. Many people visit the riverside town just to buy habos isler. The number of its devotees is increasing steadily, the fame of the Hungarian foamy isler has also gone beyond borders.

This special royal icing confection was dreamed up by László Hegedűs, a confectioner who worked at the sometime Kádár’s pastry shop in Szolnok. He was brooding over a solution how to use leftover egg whites when the idea came to his mind. He whipped the egg whites with hot sugar syrup until stiff and stabilized it with a dash of vinegar. He used butter pastry at first, but it hardened quickly, so he decided to pipe the royal icing between linzer rounds, which became softer in time.

Coating was an open question long; at the beginning Hegedűs dipped the cookies into melted chocolate, but later he switched to fondant flavoured and coloured with caramel, which is used to this day. Good to know that the glaze remains colorful and shiny, if the the pastry is spread with hot apricot jam and fondant is poured onto this jam layer.

How to make at home

The recipe of homemade foamy isler is a simplified version of the original preparation method. Instead of fondant it calls for melted chocolate. As the filling is very sweet and concentrated, I didn’t want big cookies; I used a 2 inch cutter, so the recipe yielded 35 isler cookies. According to the original recipe the whole cookie sandwich is coated with glaze, which is not so easy to carry out. But you can choose to dip only the top of the cookies into melted chocolate. I decided on the latter, so 7 ounces of bitter sweet chocolate were enough. 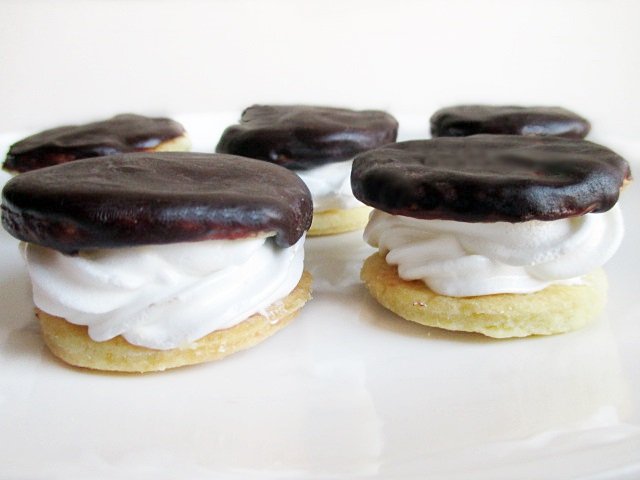 Sift the flour in a bowl, add egg yolks, cubed butter, sugar and lemon zest, and knead into a smooth dough. Wrap and chill in the fridge for 30 minutes.

On a floured surface roll out the dough to a thickness of 2-3 mm, cut out rounds and place them onto the prepared baking sheets. Bake them for 8-10 minutes or until barely golden. Transfer the disks onto a rack and let them cool.

Place the powdered sugar in a sauce pan and add water. Bring it to a boil, reduce the heat to medium-low and cook for 1-2 minutes. Turn off the heat and let the sugar syrup cool for 1-2 minutes. In the meantime, over a pot of simmering water start to whip the egg whites until very soft peaks form. Add lemon juice, then in a fine stream pour in the syrup while whisking constantly. Whisk until very thick and stiff. Remove the royal icing from the steam and let it cool for a few minutes.