Túró Rudi is one those things that makes the Hungarian heart beat faster. It’s the sweets Hungarians living abroad miss the most. This popular cottage cheese filled chocolate bar has been produced since 1968. The “Rudi” in the product name comes from the Hungarian rúd, which translates to rod or bar, and is also a nickname for the name Rudolf. 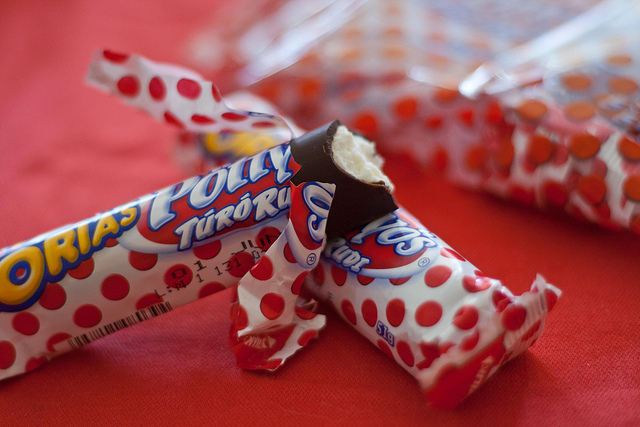 The recipe of Túró Rudi was developed after a study trip to the Soviet Union, and it was based on a Russian round confection made with curd cheese, butter and fat mixed together, and covered with dark chocolate.
Sándor Klein, a teacher at the Budapest University of Technology, gave the product its name, which sparked off a debate as people thought the name was vulgar because the word “Rudi” also has an erotic meaning in the Hungarian language. So Túró Rudi was censored and had to start its carrier without advertisment. But the name stayed, and throughout the 1970s, turned out to be very successful.

Making Túró Rudi at home is not impossible, but those small bars require a lot of time and handiness. The following cake successfully reproduces the flavours of Túró Rudi, and its preparation won’t drive you up the wall. 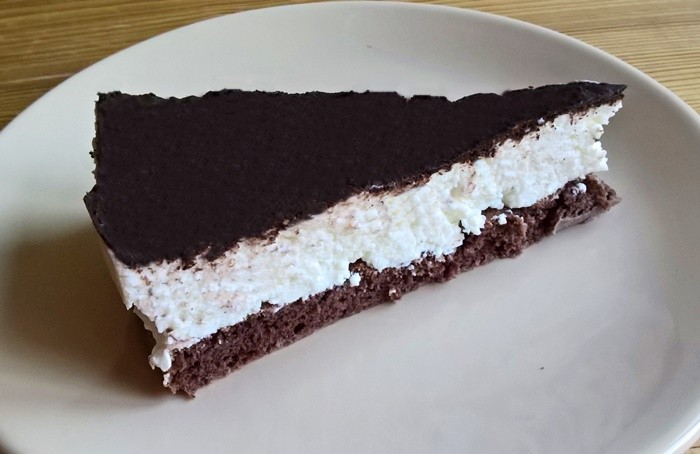 Ingredients:
For the sponge cake:

For the sponge cake combine flour, cocoa and baking powder. Separate the eggs, and whisk the egg whites until stiff peaks form. In a separate bowl beat egg yolks and sugar together to a ribbon stage. Stir the cocoa-flour mixture into the beaten egg yolks, then gently fold in the whipped egg whites. Pour the batter into the prepared cake pan and bake for about 15 minutes or until a toothpick comes out clean. Remove cake from the pan and let it cool on a wire rack.

Combine gelatin and water, and warm until gelatin dissolves completely (but don’t boil it!). Set aside and cool until lukewarm. Place cottage cheese in a bowl. Add powdered sugar, vanilla, sour cream, lemon zest and juice, and mix until well combined. In a fine stream, while whisking constantly, pour gelatin into the mixture. Whip the cream until stiff, and gently fold into the cottage cheese cream.

Put the cocoa sponge cake in a clean springform round pan and spread the filling over the top evenly. Chill the cake for 3-4 hours.

Melt the chocolate over a pot of simmering water. Once it’s fully melted, combine with one tablespoon of oil. Remove cake from the pan and pour the glaze over the top. Put the cake in the fridge until the glaze sets.