Its popularity is equal to Rigó Jancsi, at hearing its name chocolate fans sigh pleasurably evoking the taste of rum soaked sour cherries hidden in the dark chocolate cream filling. There are no authentic evidences why this dessert has been called goosefoot, but its name has become inseparable from the descriptive term called death by chocolate.

Lúdláb consists of a cocoa sponge cake and a thick layer of so called Parisian cream with rum soaked sour cherries, topped with dark chocolate glaze. Parisian cream is a chocolate ganache made from chocolate and cream, and combined with butter. Rum is an essential ingredient, if you want to serve the cake to kids, replace the alcohol with imitation rum extract. 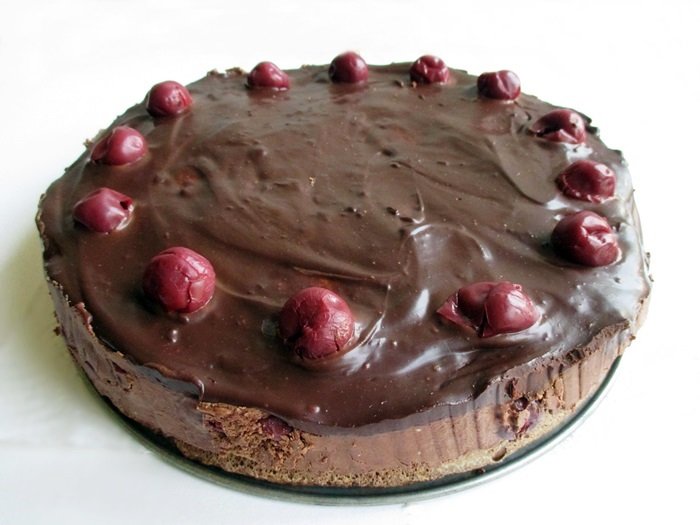 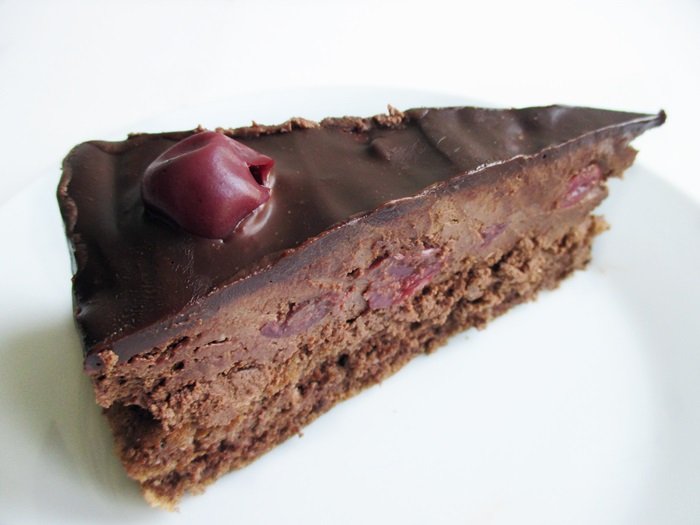 Ingredients:
For the cake:

Whip the egg whites with a pinch of salt until stiff. Beat the egg yolks and sugar until the mixture reaches the ribbon stage. Add flour, cococa and baking powder and stir to combine. Gradually fold the egg whites into the yolk mixture. Pour the batter into the prepared cake pan. Bake for 20-25 minutes or until a toothpick comes out clean. Remove cake from the oven, gently cut along the edge and open up the springs. Remove the cake from the pan and place on a wire rack to cool down completely.

In a saucepan bring whipping cream to a boil, remove from the heat, add dark chocolate broken into smaller pieces and stir until chocolate melts and fully incorporated. Add sugar and cocoa powder and whisk to combine. Let it cool down to room temperature.

Beat the butter until very fluffy. Once the chocolate ganache is at room temperature, add to the whipped butter and beat until well combined.

Place the cake layer on a platter. Spread the layer with half of the filling. Arrange sour cherries on top, reserving some pieces for decorating the top of the cake. Cover the sour cherries with the remaining Parisian cream. Chill the cake for at least 1 hour before covering with the chocolate glaze.

Melt dark chocolate with whipping cream, cool to room temperature (to avoid melting the Parisian cream) and spread on top of the cream filling. Decorate the top with sour cherries. Put the cake back in the fridge and chill thoroughly before slicing. Dip a knife into a large glass of hot water, quickly wipe it clean and cut your slice.