Brassói aprópecsenye literally means tiny roasts from Brasov; however, these “roasts” are in fact bits of pork fried up and served on a bed of fried potatoes.  On the basis of its name its origin can seem unequivocal, but there are at least 4 different theories about who and where made this dish for the first time.

Some people put the recipe down to Nándor Gróf who supposedly created it in 1948 on a train running between Budapest and Brasov. Others say that it comes from Brasov and it was originally made from beef instead of pork. Endre Papp, the sometime leader of the Matthias Cellar Restaurant in Budapest acknowledged this dish as his invention, which he first cooked in 1950. The habitants of Óbuda insist that the wife of the Weiss pub’s owner dreamed up the recipe and made for the birthday of Károly Brassóy, a local joiner.

As it has failed to do justice relating to its origin, it’s no wonder that there are several brassói recipes circulating that contain, among others, tomatoes, garlic, marjoram, green peas or mushrooms. Everyone does it differently. In my recipe garlic dominates, my family doesn’t like brassói with tomato. You can use pork shoulder or blade stake, or if you prefer lean pork, buy tenderloin or pork chop. Potatoes have to be boiled before frying, so choose such variety that doesn’t tend to fall apart or becomes water-logged when boiled. 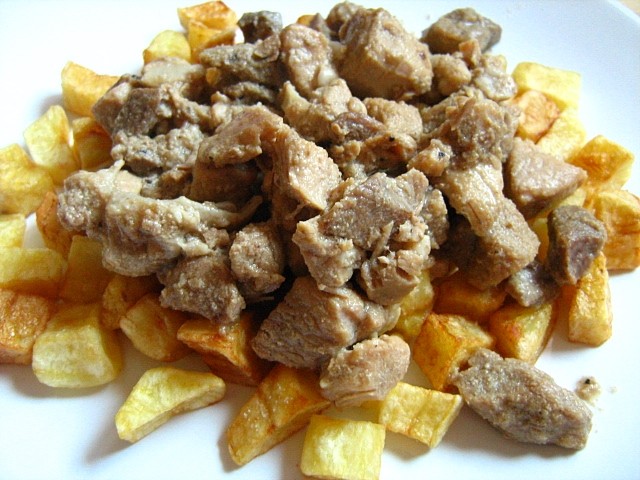 Boil potatoes with their skin on. Drain and let them cool.

Cube the meat and the smoked bacon. Peel garlic cloves and the onion, chop the onion finely, crush the garlic.
Heat up lard in a pan, add bacon and onion and sauté until translucent. Put in the cubed shoulder and fry until meat turns white on each side.

Pour in 200-300 ml of water to cover the meat, reduce the heat, add two-thirds of the garlic, salt and pepper. Cover the pan and cook until meat becomes soft. Check on it regularly, and add more water if necessary. When the meat is tender, remove the lid, add the remaining garlic and increase the heat to boil away the rest of the water.

In the meantime peel boiled potatoes and cut them into cubes. Fry them in a separate pan in a little oil until golden brown on all sides. Stir carefully in order to avoid smashing them.
When both meat and potatoes are done, stir them gently together.