Gyuvecs is a Balkan layered dish made up of lecsó, meat, rice and/or potatoes. The word gyuvecs refers to a ceramic dish that this food was originally cooked in. Bosnians make gyuvecs with mutton, Serbs cook it with pork, and Bulgarians use potatoes instead of rice.

As Hungary is bordered by Serbia to the south, the Slavic culture makes its effect felt in the southern regions of our country. The following gyuvecs recipe comes from Baja, a city in Bács-Kiskun County. This gyuvecs consists of lecsó (onion, tomato, wax pepper), thin slices of pork, cooked rice and boiled potatoes, all covered by an ample amount of sour cream. 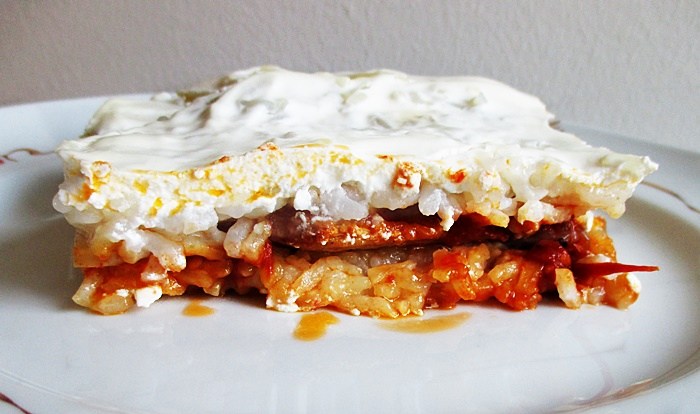 Boil the potatoes with their skin on until tender. Drain and let them cool.

Cook the rice in salty water, then set aside.

Dice the onion, chop tomatoes and wax peppers coarsely. If you want to peel the tomatoes, slice a shallow “X” in the bottom of each tomato, then drop them into a pot of boiling water. Wait until their skins start to wrinkle and split, then scoop them out with a slotted spoon and transfer them to a cold water bath. Once cooled, use your fingers to remove the tomato skins.

Cut 2-3 slits on the edges of each pork slice to prevent them from curling, then salt and pepper them. Heat lard in a frying pan and sear the pork until both sides turn golden brown. Transfer meat onto a plate, and make lecsó.

Add finely chopped onion to the hot lard left in the frying pan. Sauté until translucent, then add coarsly  chopped wax peppers. Cook for about 8-10 minutes, then stir in tomatoes. Season with salt and pepper, and cook until soft.

Peel and slice the boiled potatoes. Grease an oven-proof dish thoroughly. Place half the potatoes into half the bottom of the dish, spoon rice into the other half of the bottom and smooth out. Sprinkle with salt. Lay the pork over them, then cover the meat with lecsó. Finish layering by putting the remaining potatoes and rice on top of the lecsó. Salt and spread the top with sour cream. Cook in the oven for 20-25 minutes at 200°C / 392°F until sour cream turns light pink.
Mentés