Hortobágy crêpes are considered as one of the most traditional Hungarian dishes, whose recipe was created for the Brussels World Fair in 1958, although something similar was already published in the cookbook of Mrs. Kollmann in 1939. Hortobágy crêpes, which are virtually served as a hot appetizer in the restaurants, are filled with stew meat, folded up and poured over with the stew sauce combined with sour cream. Despite their fancy name, which rather serves tourist attractive purposes, these crêpes have nothing to do with Europe’s largest grassland.

Many cooks tend to use leftover stew for filling the crêpes, but I don’t recommend it – this dish is not a leftover graveyard, it deserves a fresh, savory stew, which doesn’t take such a long time to cook. The meat can be veal, pork or chicken; if you decide on chicken, instead of the dry, tasteless chicken breast use boneless thighs, so your stew will be much juicier.

Don’t use mince to make the stew, but dice the meat instead – the result will be more palatable this way. You can grind the meat afterwards, or, as I did, use a fork to mash the tender meat.
The stew sauce is drained off and thickened with sour cream and flour. Avoid adding to much flour since the goal is not to make an adhesive paste, but a light and silky sauce. The sauce can be enriched with a dash of cream, but don’t let it dominate. 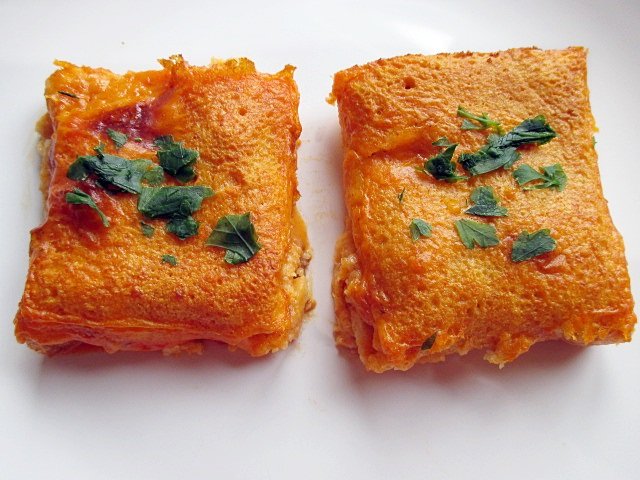 Ingredients:
For the crêpes (it makes approx. 10 pieces):

Melt the lard in a pan, add chopped onions and sauté until translucent. Add meat and garlic, and cook until the cubes turn white. Remove the pan from the heat, stir in paprika and caraway, add a whole tomato and sliced pepper. Pour in water just enough to cover 3/4 of the food. Return to the heat, add salt and slowly cook until the meat is very tender (add more water if needed to get enough sauce at the end).

Meanwhile make the crêpes. In a bowl whisk together egg, salt, flour and milk until smooth and lump free. Finally incorporate 1 tablespoon of oil. Fry the crêpes and place them on a plate.

Once the stew is done, drain the stew by placing it in a fine mesh strainer and letting the sauce collect in a bowl. You can choose if you grind the meat or if it’s very tender, you can mash it with a fork. Add 2-3 tablespoons of sour cream and 1 tablespoon of sauce to the meat and stir to combine.

Divide the meat among the crêpes, fold them up and place in a greased casserole dish. Preheat the oven to 200°C.

Combine the stew sauce with the remaining sour cream and 1 tablespoon of flour, bring it to a boil and cook, while stirring constantly, for 2-3 minutes to eliminate the raw flour taste. Pour the sauce over the crêpes and place in the oven for 15-20 minutes. Serve with green salad.