Hunting has a long tradition in Hungary, the diversified and ample game population provides great possibilities for hunters nearly all year round. The atmosphere of coursings in the autumn-winter season is fascinating and incomparable. Both large and small games can be hunted in different regions of the country, the homeland of small game hunting is the Great Hungarian Plain, most of the hunts take place in Békés, Csongrád, Hajdú-Bihar and Szabolcs-Szatmár-Bereg counties.

One of the most hunted small games in Hungary is pheasant. It is a well-known gamebird, perhaps the most widespread and ancient one in the whole world. Pheasants were hunted in their natural range by Stone Age humans, since the Roman Empire the bird was extensively introduced in many places and has become a naturalized member of the European fauna. In order to meet the increasing demands, nowadays pheasant is bred on game farms. Birds are supplied both to hunting and restaurants, but they are also available for home cooks.

Due to the hunting traditions game often appears on the menu of restaurants and households. Despite that there are many people who shy away from tasting game. However, really exciting and princely dishes can be made from game meat. Game is one of the healthiest foods, low-fat, excellent source of proteins containing valuable vitamins and mineral salts. The quality of game meat is determined by several factors such as the animal’s age, sex, nutrition, conditions of bagging. Game meat is dry and fibrous, so its preparation requires more work and special care. 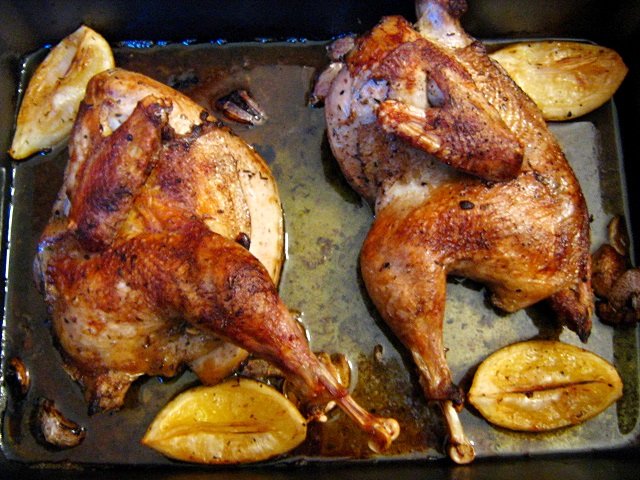 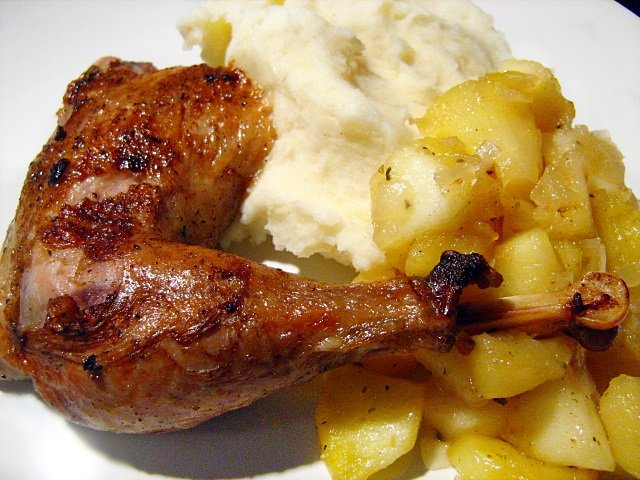 For the side dish:

Using a heavy, sharp knife cut the pheasant in half down the back, then chop it in half down the middle. Trim off any fat or bruised bits. Cut the lemon in four pieces. Place the pheasant into a bowl, squeeze over the lemon juice and add the lemon quarters to the bowl, too. Lightly crush the garlic cloves with the flat side of a broad knife, but don’t peel them. Add them to the bowl. Pour over the olive oil and the white wine, sprinkle with thyme, marjoram and freshly ground black pepper. Coat the meat with the marinade evenly, cover and chill in the fridge for an hour.

Preheat the oven to 200°C / 392°F. Salt the pheasant. Melt butter in a heavy-based frying pan. When the butter is hot, remove the meat from the marinade and sear, skin-side down, to colour. Turn the pieces and brown the other side. When the pieces are browned, place them in a roasting dish. Pour over the marinade with the lemon quarters and garlic cloves from the bowl and the dripping from the frying pan. Place the pheasant in the oven and roast until tender and cooked through (the juice will run clear when the thigh is pierced with a skewer). Remove from the oven and rest for 15-20 minutes.

While resting the meat, make the side dish. From the roasting dish spoon 1-2 tablespoons of dripping into a sauté pan and heat it up. Add finely chopped onions and over low-medium heat cook until almost tender. Stir in diced apples, sprinkle with salt, pepper and marjoram, add sugar and  cook until the apples are tender. Cut the pheasant into serving pieces and pile onto a large plate. Serve with the apple-onion sauté and/or mashed potatoes.