The homeland of this simple, but divine pork roast is Torda, a town near Kolozsvár (Cluj-Napoca) in Transylvania. Roast of Torda is usually served as a part of the Fatányéros (Mixed Grill), which is a dish containing different pan-fried or grilled meats on a wooden platter.

This roast was made originally at the fair of Torda and it was sold with fermented cucumbers and white bread. Torda is famous, among others, for its salt mine; that natural, untreated salt was used to brine the pork in a 6% salt solution.

Tordai pecsenye is usually made from skin-on pork loin, but blade stake or pork belly can be suitable as well. Meat is brined for at least 3-4 hours, but brining can last up to 10 hours. It’s recommended to cut slits on the edge of the meat slices otherwise they will curl during frying. If you use skin-on, fatty meat, spread the skin and fat with milk before frying, so they will become crispy. 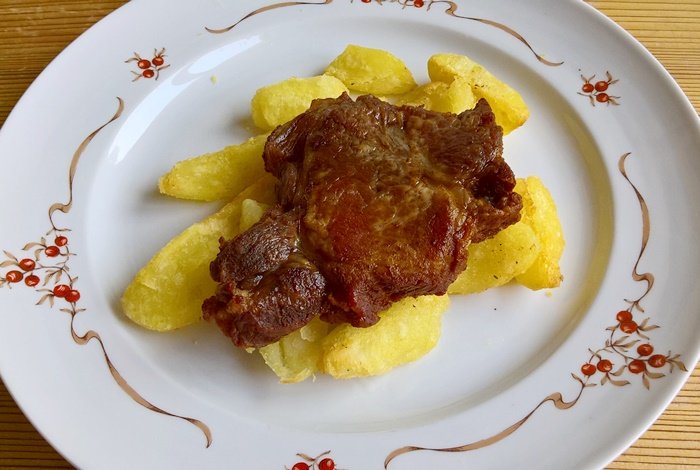 For the spicy potatoes:

Dissolve salt in water. Cut 4-5 slits on the edges of each slice to prevent it from curling. Layer the slices in a bowl and pour the brine over them. Make sure that the liquid covers every slice. Chill for at least 3-4 hours.

In a deep frying pan melt the lard. Add peeled onion and garlic cloves. Once the lard is hot enough, remove onion and garlics and carefully put the pork slices into the lard. Over medium heat fry until tender and golden brown. When they are done, transfer the slices onto a plate lined with paper towel.

Peel the potatoes and cut them into quarters. In salty water cook them until halfway done (it takes about 5-10 minutes). Drain and place them into a bowl. Sprinkle and coat them evenly with cornflour, then season with salt, pepper, marjoram, paprika, and salt. In a frying pan heat the lard and fry the potatoes until golden and crispy. With a slotted spoon transfer them on paper towels to absorb excess lard.

Serve roast of Torda with spicy potatoes and pickles.