Millet is one of those ancient grains that have been used throughout the ages and across many countries, and have played an important role in human consumption. It has a 10.000 year long history, traced back to its origin in China, where it was the main grain before rice. Millet was one of the most important grains in the ancient and medieval Hungary, it was first mentioned in a charter of King Béla II in 1190. The entry of cereals, rice and potato on the scene has gone a long way towards driving millet’s cultivation into the background. Although millet is most often associated as the main ingredient in bird seed, it is not just for the birds.

Millet belongs to the group of small-seeded grasses, widely grown around the world as grain for fodder and human food. The most widely grown millet is pearl millet, which is a significant crop in India and parts of Africa. While millet is a basic food in the developing countries, it’s less important in the Western world, most people have not even heard of it.  Millet has nevertheless unique, positive health benefits.

Though millet is often called grain, it’s actually a seed, which is a rich, gluten-free and non-allergic source of nutrients such as magnesium, calcium, manganese, tryptophan, phosphor, fiber, B vitamins and antioxidants. Millet is alkaline and digests easily. It hydrates your colon to keep you from being constipated, and acts as a prebiotic feeding microflora in your inner ecosystem. Millet provides serotonin to calm and soothe your moods. It does not feed pathogenic yeast. Millet can help lower cholesterol and the risk of type 2 diabetes.

Millet has a sweet nutty flavor that can accompany many types of food. It can be used in many (sweet or salty) dishes from soup to bread, and it can also replace rice. Before cooking millet shall be washed and rinsed thoroughly. One cup of millet is cooked in 3 cups of water. The recipe of Hungarian millet mush calls for bryndza, a soft and white sheep’s milk cheese known for its characteristic strong smell and taste. It can be, however, substituted for any other creamy white cheese. 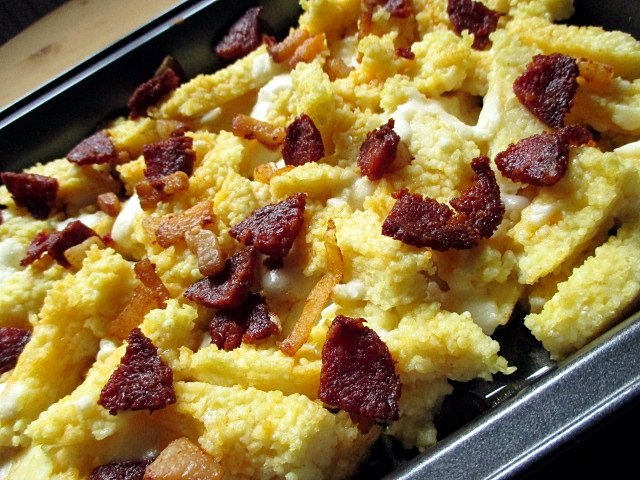 Thoroughly rinse the millet. Line a tray with parchment paper.

Add salt and lard to the water and bring it to a rolling boil. When water is boiling rapidly with lots of bubbling, add millet and cook over medium-low heat, while stirring constantly, for 12-15 minutes until millet is soft and mushy. Turn off the heat and instantly stir in one tablespoon of flour. Pour the mush onto the tray and spread 1/2 inch thick. Let it cool.

In a skillet fry chopped bacon and sausage slices. Drain them on a paper towel. Preheat the oven to 200°C / 392°F.
Cut the hardened millet mush into little pieces and arrange them with bryndza, bacon and sausages in layers in a smaller, lightly greased casserole dish. Sprinkle 1-2 tablespoons of bacon fat over the top. Cook in the oven for 10-15 minutes until bryndza melts and the dish gets thoroughly warm.