Pork flank is not often used in the kitchen, although if you want to grill or make some stuffed dish, it is a good choice since it doesn’t become dry during cooking. Flank is a boneless, fatty part of the pork belly, it lies between the ribs and legs.

The only trick or difficulty to prepare stuffed pork flank is that you have to cut open the meat with a sharp knife to form a pocket where the stuffing will be filled. I know myself well enough not to start such a dangerous operation, so I decided to ask the butcher to make it instead of me.

The stuffing may vary depending on the season, limited only by your imagination. Now I chose to use mushroom and chicken liver, but it can be made from sausage, boiled eggs, ham, bacon, cheese, dried fruits or whatever you like. There is one thing you have to pay attention to, namely if you choose to use bread or bun as an ingredient, it must be stale otherwise the stuffing will be gooey. 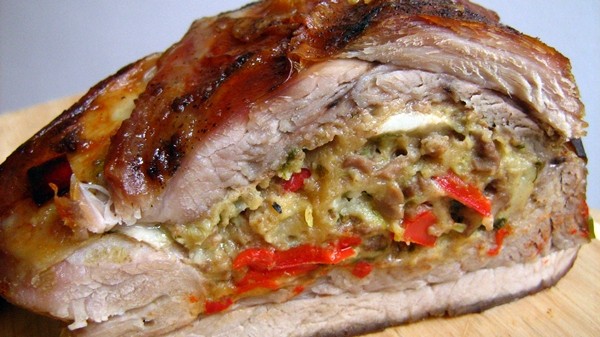 Place the stale buns in a small bowl to soak in milk.

With a sharp knife cut open the meat or gingerly enlarge the “pocket” of the flank made by the butcher in order to be able to fill the meat with as much stuffing as possible. Be careful not to cut through the flank. Salt and pepper.

Trim the chicken livers, then put them in a food processor to puree until smooth.

Finely chop the leek and garlic cloves. Slice the mushrooms.

Heat the olive oil in a frying pan. Fry the leek and garlic until they look glassy. Add mushroom slices and the liver puree, sprinkle with freshly ground pepper and cook for a few minutes until tender.

Meanwhile cut the bell pepper into tiny cubes, then chop the parsley.

Squeeze the buns and put them in a large bowl. Add the liver-mushroom mixture, pepper cubes, chopped parsley, 2 eggs, salt and pepper and stir until well combined.

Stuff the flank, but don’t overfill it because the meat can easily tear. Close the hole using wooden toothpicks or metal pins.

Preheat the oven to 200 °C / 392°F. Place the stuffed flank in an oven bag (if some stuffing remains, spoon it beside the meat) and roast for 90-100 minutes until pork is cooked through, skin is golden and crispy and stuffing is stiff. Wait 20-30 minutes before serving, it will be easier to slice.