Sonkás kocka is an old member of the Hungarian pasta repertoire, which has lost some of its glamour lately. The noodles are not only cooked, but also baked, topped with a savory ham-sour cream mixture. I prepared this dish on the base of the recipe of Károly Gundel, who published it in his coobook “Kis magyar szakácskönyv” in 1937.

According to the practice of that era Gundel used homemade pasta, but today it is hardly to be expected that you knead, roll and cut your own noodles each time you want to eat them. Therefore, store-bought pasta is an acceptable alternative, you should only pay attention to one thing: the more eggs the pasta contains, the more it resembles the homemade version.

In the original recipe egg yolks are beaten with lard, but feel free to replace lard with butter. Cheese is not prescribed, but it won’t mess up the dish if you add some to the noodles. 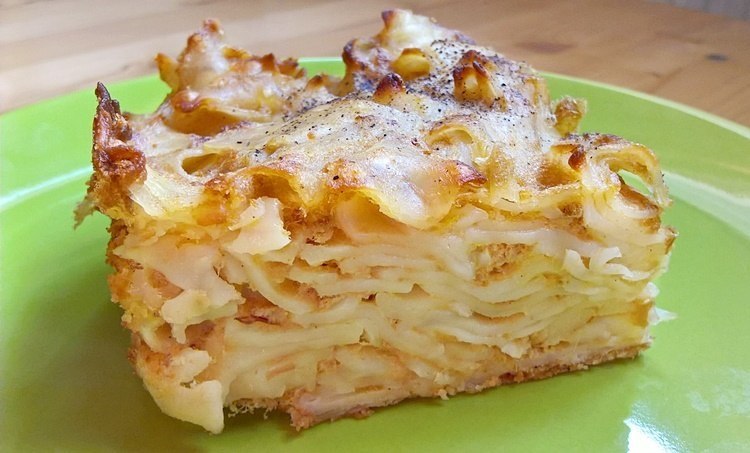 Grease and dust an ovenproof dish with breadcrumbs.

Cook the noodles in a large pot of salty water until tender.

In the meantime beat egg yolks and lard until pale. Mix in sour cream and ground ham, salt and pepper. Whip the egg whites until stiff, then gently fold into the ham mixture.

Once the pasta is done, drain and stir into the ham cream. Transfer the noodles into the prepared dish and bake until top is golden brown (30-35 minutes).