Potato pasta, also known as gránátos kocka or grenadírmars, is a simple and cheap dish made from potatoes and noodles. Despite that its recipe varies from region to region, cooking method and seasoning can be different. It’s usually served as a main dish, but it can be eaten as a side dish, as well. According to the most commonly known version potatoes are first cooked in water, then added to sautéed onion and seasoned with paprika.

In our family potato pasta has been prepared in a different way for generations. Potatoes are thinly sliced and in a small amount of lard they are steamed until tender, then over high heat cooked until golden brown. Quantity of the potatoes the recipe calls for may seem to be too much, but during the cooking process it will decrease by half. Only salt and pepper are used to season the dish. You can use store-bought (square shaped) pasta, but krumplis tészta also goes well with nokedli. 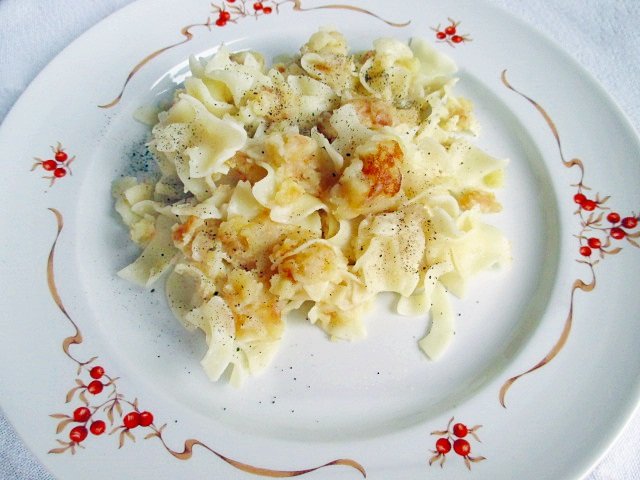 Peel and thinly slice the potatoes. Melt lard in a non-stick sauté pan, add potatoes, salt and pepper, cover, and over low heat cook until tender (there’s no need to add water, potatoes cook in the steam from their own juices). Stir regularly. Once potatoes are tender enough to be smashed with a wooden spoon, increase the heat and cook uncovered until golden brown. Due to evaporation the amount of potatoes will be reduced by half.

In the meantime cook the pasta in salty water following to the package instructions. Drain well and add to the potatoes. Adjust salt and pepper, and heat through.