The recipe of this apple soup has come down to us from my maternal great-grandmother. The apple is in pleasant harmony with the carrot and parsley root. It’s very important to choose a tart apple variety otherwise the soup will lose its character.

It’s an easy-to-make soup, there is only one thing you have to pay attention to, namely carrot and parsley must be cooked first until soft, and only after that can apple be added. If you fail to do so, the apple’s acidity prevents the vegetables from getting cooked. 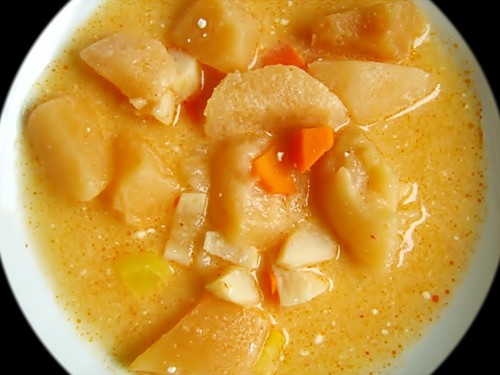 Melt the lard in a soup pot over medium heat. Once the lard is hot enough, whisk in one tablespoon of flour. Whisk constantly while it bubbles over medium heat until the roux reaches the blond stage.
Remove the pot from the heat and sprinkle the roux with sweet ground pepper. Stir to combine. Pour in the water.
Put the pot back on the heat. Add the parsley root and carrot cubes. Sprinkle with some salt.
When the vegetables are tender, add the apple cubes and cook until soft.
When it’s ready, turn off the heat.
In a small bowl combine sour cream with a ladle of hot soup, then slowly pour the mixture into the soup while stirring continually.
After serving sweeten the soup to taste.