Hungary is suffering from a cruel heat wave, in such a hot weather light and sourish foods take priority. Fruit sauces are as popular as vegetable stews (főzelék) in Hungary, they are generally served as a side dish with roasted or boiled meats, but they are also enjoyable in themselves.

In our garden there is a gooseberry bush, but it’s too young and it produced only a few berries. But I found beautiful yellowish gooseberries on the market, so there was no question but that I will make a great sauce. Gooseberries can be eaten as-is, or used as an ingredient in desserts, soups or sauces. They are also used to flavour beverages and can be made into fruit wines and teas. Gooseberries can be preserved in the form of jams or stored in sugar syrup.

Making the sauce is an easy job,  you don’t need to wait long to enjoy it. You have to cook the gooseberries until their skins start to burst, after that you can add the water-flour-sour cream mixture to thicken the sauce. It depends on you if you eat it hot, or chill before serving. No matter what you choose, I’m sure, you will adore it. 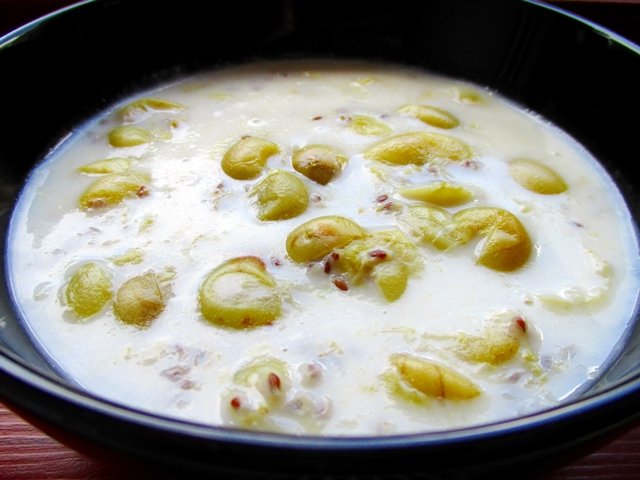 Place the gooseberries, vanilla seeds and sugar in a sauce pan, and add just enough water to cover. Bring it to a boil, and over medium heat cook until the skins of the gooseberries start to burst.

In a small bowl whisk water, sour cream and flour together, and pour the mixture into the sauce while stirring constantly. Cook for a couple of minutes until the sauce thickens.