Goulash is one of the Hungarian national dishes and a symbol of the country. Originally I didn’t want to post its recipe because I thought everyone can make it, but while browsing the web and reading different recipes it has become obvious to me that for many people it’s not clear what we call goulash.

The name originates from the Hungarian gulyás, which means herdsman. But over time the word has got a second meaning, a meat dish that was prepared by herdsmen. The origin of the dish dates back to the 17-18th centuries, its first description was published in 1787. One thing is sure, the home of goulash was the Great Hungarian Plain, where stockriders lived and worked with massive herds of cattles. It’s likely that in the beginning goulash, pörkölt (stew) and paprikash all marked the same meat dish that was cooked with paprika in a Hungarian kettle over an open fire. Later the three terms separated and had their own meaning.

The cooking method of goulash was simplified as herdsmen couldn’t putter long; meat, onion and water were put in the bogrács (lard was not used in this case), paprika and salt were added when it was boiling. Herdsmen could do their job, they only had to feed the fire and stir the food occasionally. That goulash occupied an intermediate position between stew and soup, meat was cooked in more liquid than pörkölt or paprikash.

The goulash known by everyone today is the distant relative of the real goulash, its preparation method is similar to stew, though it’s not a stew, but a thick soup. Goulash soup can be prepared in many ways, from beef, pork, mutton or even poultry; there are mushroom and green bean goulash, but you can also meet the so called fake goulash, which is a meat-free soup. Each version has its fans, who do agree on one thing: adding flour to thicken the soup is prohibited.

Besides meat goulash soup also contains green pepper, carrot, parsley root and potato dices; celeriac and parsley leaves can be added, too. Tomato is a modern addition, totally unknown in the original recipe. The soup is seasoned with paprika, bay leaf and caraway seeds; it can be enriched with csipetke, which is a kind of egg noodles. Small bits are pinched out of the dough before adding them to the boiling soup.

For the pinched noodles:

In a heavy pot heat the lard. Add finely chopped onion and sauté until translucent. Add garlic and beef, and braise until all sides turn white. Remove from the heat, sprinkle paprika over the meat, stir to cover evenly, pour in water and return to the heat. Add caraway seeds, green pepper, bay leaf, salt and pepper, bring it to a boil, cover and cook over low heat.

In the meantime make the dough for the noodles. Place flour and egg in a bowl, and knead them together into a smooth dough. The dough should be shapeable, but not too soft. If you find the dough too tough, add some water. Pinch fingernail-sized bits from the dough and place them on a kitchen towel. 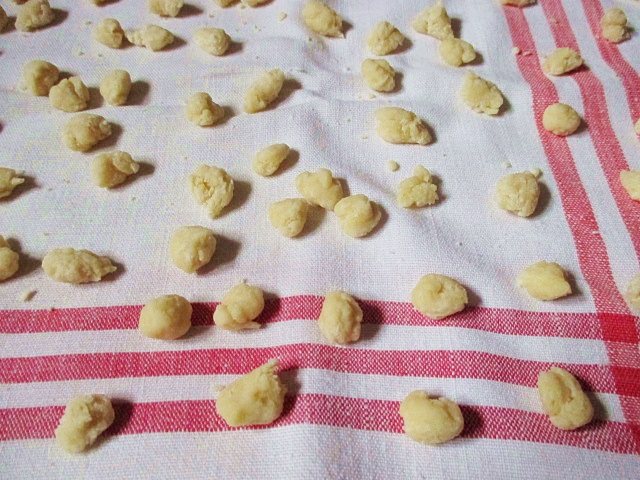 Once the meat is nearly done, add diced carrots and parsley roots to the pot. When carrots are half cooked, add diced potatoes and pinched noodles (both of them need 20-25 minutes to be tender). Serve hot with white bread.