Lentil is one of our oldest sources of food. This legume originates from Asia and it has been part of the human diet since neolithic times, being one of the first crops domesticated in the Near East. For a long time lentil was ranked as food of the poor. In addition to wheat and rye, lentil was one of the steady foods grown by the European peasantry. Lentil played a major role in improving the people’s health condition stricken with plague.

Thanks to Marie Leszczynska, the Polish-born queen consort of France, this despised legume became very popular among the nobles, too in the 18th century. The queen consort adored lentils and during her long reign she endeared lentils to the French aristocracy.

Lentil is still an important food in our days, it’s the most commonly used basic material in India and in the Middle East, meals made of lens are cooked all over the world. There is a wide variety of lentils, their colors range from yellow to red-orange to green, brown and black. In Europe the most popular ones are the brown and red lentils, Puy lentils are also often used, especially in salads.

Lentil is a healthy food, its pleasant, nutty, earthy flavor hides tons of nutriments. Lentil is a rich provider of protein and carbohydrates, and also a good source of B vitamins that improve liver function by helping liver get rid of excess fat and filter out toxins. Besides this its calcium, phosphorus, magnesium, iron, potassium and fiber content is significant, as well. 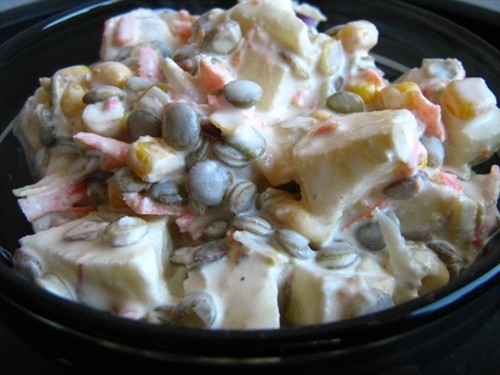 Lentils do not require it but can be soaked in order to reduce cooking time by about half. Presoaked lentils cook more evenly and faster. To prepare them, first remove debris or shrivelled lentils; rinse them in cold water and drain. Put them in a bowl and cover with water in order to let them soak overnight.
Place lentils, bay leaf  and three times more water in a large saucepan; bring to a boil. Reduce heat to medium-low, and cook for about 15-20 minutes, or until lentils are tender. Lentils will vary in their cooking times depending on their variety and age. Drain, remove bay leaf, and cool.
Chop the red onion; peel and grate the carrots.
In a large bowl mix mayonnaise, sour cream, salt and pepper together.
Add garlic cloves crushed with a garlic press, chopped onion, sweet corn (drained), lentils and carrots to combine.
Finally peel and dice the apples and add to the mixture.
Cover the bowl and place in the refrigerator for at least 3 hours before serving.