Banana leaf is a brioche-like pastry, that is named after its shape, and contrary to its name it doesn’t contain banana. It’s made from a simple sweet dough similar to brioche, filled with butter creamed with sugar and cocoa or cinnamon.

Orosháza is a small town in the Southern Great Plain region where the inventor of ‘banana leaf’ lived in the first half of the 20th century. He was Bertalan Pável, a local baker whose intention was to create a special-shaped brioche. His product was very popular and the customers began to call it banana or banana leaf.

Banana leaves are produced only in smaller bakeries since it requires a lot of manual work and the technological steps can’t be mechanized. However, its professional significance is well represented by the fact that baker apprentices are still trained today how to make banana leaves. 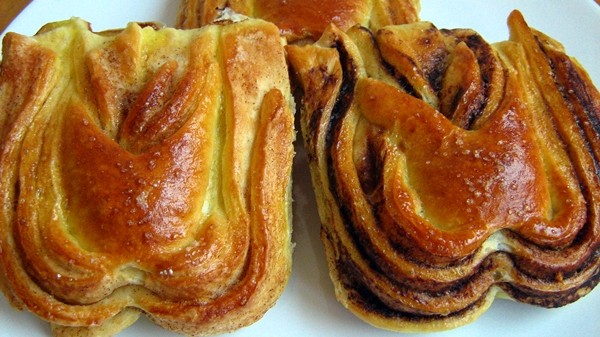 Add a pinch of sugar to the yeast and activate with lukewarm milk.
Sift the flour in a large bowl, mix with salt and sugar.
Pour the activated yeast into the flour, then add the egg yolk and soft butter.
Knead extensively until the dough becomes shiny and smooth.
Cover the bowl and let the dough double in size.
On a floured pastry board divide the raised dough into 12 equal parts and form balls. Let them rest for 10 minutes.
Meanwhile prepare the cocoa and cinnamon fillings. In a small bowl combine softened butter, sugar and cocoa powder until fluffy and well blended. In another bowl cream the butter and sugar with cinnamon.
6 balls will be spread with the cinnamon butter, the other 6 ones with cocoa butter.
Take the first ball and roll it out into a circle of a thickness of 2 mm.
Spread the filling on it, then roll it up so the dough should look like a cigar.
With a sharp knife cut the bottom half of the roll lengthwise in two, then cut the upper third part in half. 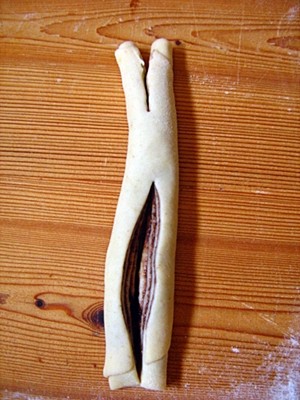 Turn those smaller halves inside out and turn up the lower longer parts next to them. 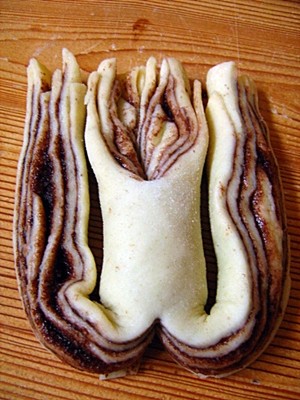 Repeat the procedure in case of the remaining balls.
Place the ‘banana leaves’ in a baking pan lined with parchment paper. Brush them with beaten egg and let them rise for about 20 minutes.
Preheat the oven to 190°C / 374°F.
Brush beaten egg on top again and sprinkle them with sugar.
Bake for 20 minutes until golden brown. 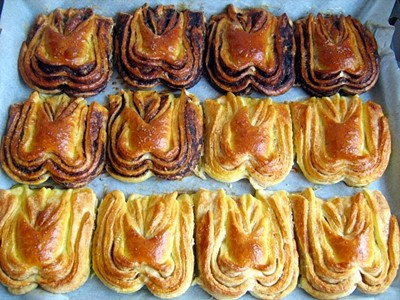