I confess I’m a poppy seed addict. As a child I couldn’t even bear its sight, now if it was possible, I would dose it “intravenously”. Beigli, strudel, noodles, dumplings, rolls, pies, cakes – there are hundreds of recipes that call for poppy seeds. I don’t know official data about the world’s poppy seed consumption, but it’s likely that Hungary takes the cake on this matter.

Poppy seeds as well as opium are derived from the opium poppy. Opium contains about 25 alkaloids (among others morphine, papaverine, thebaine, codeine) that are sources of important medicines. The Latin botanical name of the plant, papaver somniferum means the “sleep-bringing poppy”, referring to the sedative properties of some of these opiates. The white flower subspecies of the opium poppy has been considered a drug since 1 January 2006 in Hungary, the cultivation of the purple-pink flower subtype is solely legal, it’s free to grow in private gardens.

The seeds contain very low levels of opiate, so they can be used safely in foods, whole or ground, or they can be also pressed to yield poppyseed oil, which helps prevent osteoporosis. Poppy seeds are a rich source of fibre and essential fatty acids, which balance the chloseterol levels. The seeds contain iron, copper, calcium, potassium, manganese, zinc and magnesium, furthermore, the amount of B vitamins is also not negligible.
One of the most popular ways to use poppy seeds in Hungary is to make poppy seed roll. It’s made of a yeast dough and filled with ground and sweetened poppy seeds scalded with milk. 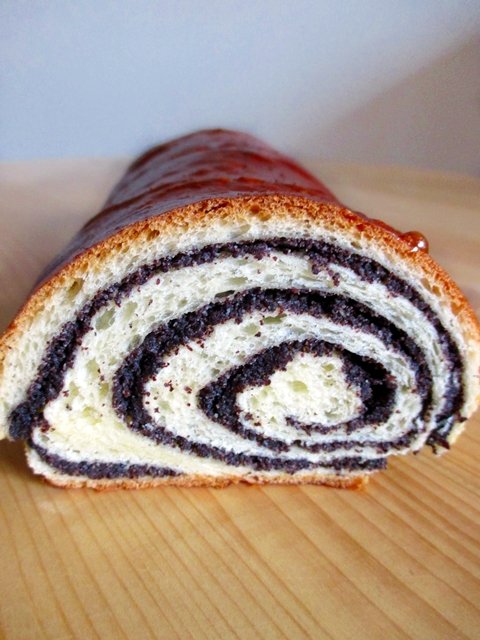 Dissolve yeast with 1 teaspoon of sugar in lukewarm milk.

Sift the flour in a bowl. Add the rest of the sugar, salt, sour cream, egg and egg yolk and the activated yeast. Mix them up by using the kneading hooks of a hand mixer. When the dough holds together, add melted butter and keep kneading until butter fully incorporated and you get a soft and pliable dough. Cover and let the dough rise until it doubles in size.

While yeast is displaying benficial activity in the dough, make the filling. Combine ground poppy seeds with powdered sugar. Bring milk to a boil and scald poppy seeds.

Turn out the dough on a floured surface and cut into two equal pieces. Roll out each piece into a 2-3 mm thin rectangle. Spread half of the poppy seed filling over each rectangle evenly, leaving a 2 cm border. Fold the 2 cm border back over the filling on all sides and press down. Roll them up and place them seam side down on a baking sheet lined with parchment paper. Brush tops with beaten egg and allow to rise in a warm place until doubled in size.

Brush tops with beaten egg again, then poke several holes into each roll. Place them into the oven and bake for 30 minutes. Cool on a wire rack.