Last week, on 6th January the carnival season officially started; a festivity based on rich folk traditions that lasts from Epiphany till Ash Wednesday celebrating the end of winter and darkness. Traditionally carnival season was the last opportunity to eat well before the food stocks ran out at the end of the winter. All the food that had survived the winter had to be eaten to assure that everyone was fed enough to survive until the coming spring would provide new food sources.

Carnival season is unimagineable without doughnut in Hungary, it can be also regarded as a symbol of farewell winter feasts. The most popular type is the so called ribboned doughnut named after the ribbon-like white stripe running along the sides of the doughnut. These doughnuts are made from a very soft, airy dough, which is very sensitive to cold and draught. Therefore all the ingredients, the pastry board and even the kicthen towel used to cover the dough have to be lukewarm or at room temperature.

Deep-fried pastries are often thought to be drenched in oil (in some cases it’s true, sadly), but these delicious doughnuts are light and crsipy. Rum is that ingredient that prevents the dough from absorbing too much lard or oil and getting soggy. Many people are averse to raised pastries, but believe me, you don’t need to have special baking experiences to prepare this pastry; if you follow the recipe’s instructions, you will manage to fry perfect, delicious doughnuts. 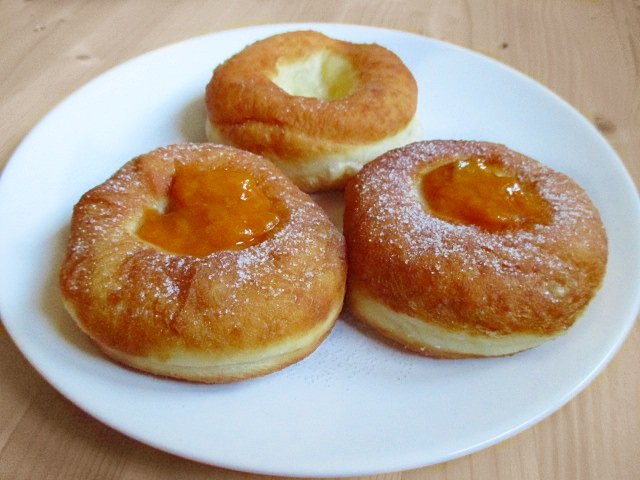 Make the flour slightly warm, the room where the dough will be prepared and rolled must be warm and draught-free. Also make a kitchen cloth (to cover the dough) and the pastry board lukewarm.

In lukewarm milk dissolve yeast with 1 tablespoon of castor sugar.

Sift the flour into a large bowl. Add the egg yolks, the rest of the sugar, activated yeast, salt and rum.  With a mixer knead until the dough holds together, then pour in the lukewarm melted butter and continue to knead into a smooth, airy, very soft dough. Cover the dough with a kitchen cloth and in a lukewarm place let it double in size for about 50 minutes.

Turn out the dough on a floured pastry board, then flatten and stretch it with your fingers to a 1-2 cm thickness. Cut out the doughnuts with a cutter or a water glass (ø 7-8 cm). Cover them with a cloth and raise them for approximately 30 minutes. But be careful, don’t let them get overraised otherweise the white ribbon won’t appear on the doughnuts during frying.

Heat the oil or lard in a pan – drop in a piece of dough to check the temperature and avoid overheating. With your fingertips make a hollow in the middle of each doughnuts. Put in only 3-4 pieces at once, holed side down, cover the pan with a lid and fry one side until gets golden brown. Turn over and fry the other side without the lid. That’s how you get the ribbon-like white stripe. Try to maintain a steady medium temperature while frying in order to avoid burning. Put them on a tray lined with paper towels.

Doughnuts may be sprinkled with castor sugar. Serve fresh with apricot jam.