If you asked anyone in Hungary to enumerate some “vintage” things that awaken pleasant memories, chocolate-vanilla rings would be certainly mentioned. These tiny vanilla cookies made of shortcrust pastry and dipped into melted chocolate have been produced by Győri Keksz uninterruptedly since 1963 notwithstanding that the factory was privatized in 1991 and went over into foreign proprietorship.

The country’s first biscuit factory (a rebuilt steam mill owned by Hermann Bach) started to work in the place of the current plant in 1880. In 1892 Bach sold the factory to Lajos Koestlin, who moved to Hungary because of the Austrian competition and brought along all the equipments from his biscuit factory in Bregenz. The plant developed rapidly, it produced biscuits, zwiebacks, wafers and gingerbreads, and employed 1000 workers in 1913. The Koestlin products were in demand throughout the Monarchy and the plant in Győr became the citadel of the Hungarian biscuit production.

After the First World War the factory struggled with shortages of raw material, the number of workers dropped to 500; therefore, the management decided to start the chocolate and candy production in 1922 and 1926. In 1931 the firm was turned into a joint stock company, and despite the market difficulties a wide range of products was still maintained. During the German occupation, the plant was declared war factory and produced only biscuits, zwiebacks and wafers. But the stocks ran out by the spring of 1945 and the production was stopped.

In 1947 the business was brought under state control, and the new company Győri Keksz worked as a flagship of the socialist sweets industry for decades. It was expanded repeatedly, machines were modernized, in 1985 a new cookie production unit was inaugurated, in 1988 and 1990 new wafer and candy production lines were put into operation.

The chocolate-vanilla rings were worked out experimentally by Emil Horváth, who found some machine parts in the factory’s storeroom that were used in the Koestlin era and proved to be appropriate for the “ring-projekt”. Nowadays there’s no shop in Hungary where you can’t buy the popular vanilla rings, but they can be made at home easily, as well, and no doubt, in this case homemade and store-bought can be mentioned in the same breath. 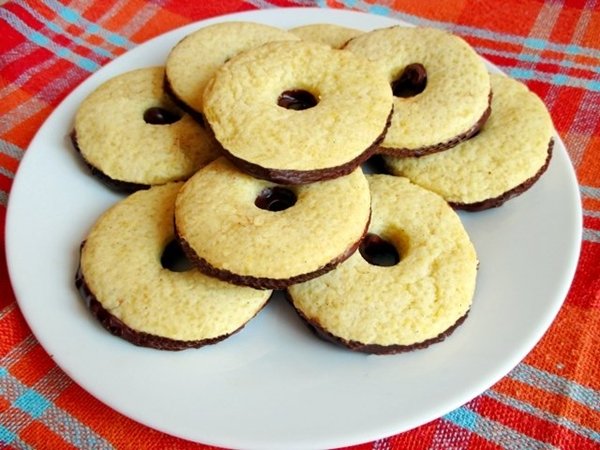 Sift the flour into a large bowl, add the butter and rub in with your fingertips. Add powdered sugar, vanilla seeds, salt, baking powder and egg yolks and knead to a firm dough. Wrap in cling film and chill for 30 minutes.

Bake the cookies for 10 minutes. Remove from oven and place on a wire rack to cool.

Melt the chocolate and butter either in the microwave oven or over a pot of simmering water. Dip the bottom of each cookie into the melted chocolate and put the cookies upside down back on the wire rack until the glaze sets.