Dobos torte is the best and most famous Hungarian torte made of 6 paperthin sponge cake layers, filled with chocolate butter cream and topped with caramel slices. This six-layer cake was named after József C. Dobos (1847-1924), a Hungarian chef and confectioner. He is often mentioned as one of the most influential chefs in the Hungarian culinary history.

Dobos introduced his torte on the National Exhibition in 1885. His aim was to create a cake that would last longer than other pastries in an age when cooling techniques were limited. Caramel topping and walnut coating served this purpose, as they helped prevent the torte from drying out. Dobos was the first in Hungary who used butter cream to fill the cake.

The torte was a great success, and became famous throughout Europe soon. Dobos received a lot of orders, so he designed a wooden cake box to ship his torte to customers all over Europe. The torte was so popular that there was an entire pavilion devoted to making and selling it at the Millennium Exposition in 1896. As the cake was frequently copied, without success, Dobos generously donated the recipe to the Pastry and Honey- Bread Makers Guild in 1906 under the reservation that the recipe has to be available for the public.

There is a common misconception about the recipe of the torte that the filling is a simple combination of soft butter and melted chocolate or cocoa powder. However, the base of the filling is eggs beaten over boiling water, which make the chocolate butter cream lighter and foamy. Thin sponge cake layers offset this full-bodied filling, too.

Dobos torte is not a five-minute dessert, you have to devote a few hours to prepare it, but it’s worth. My mom’s birthday was a good opportunity to give it a whirl. I baked 3 sponge cakes and cut them into 2 layers, which was tricky because the cakes were thin. But you are free, of course, to divide the batter into 6 equal portions and bake 6 separate layers.

The original recipe calls for cocoa butter and solid cocoa mass, but those ingredients can’t be bought in every store; therefore, I substituted them for dark chocolate and cocoa powder. I had strong doubts about making the caramel topping, but it was easier than I thought, and believe me, if I did, so can you. 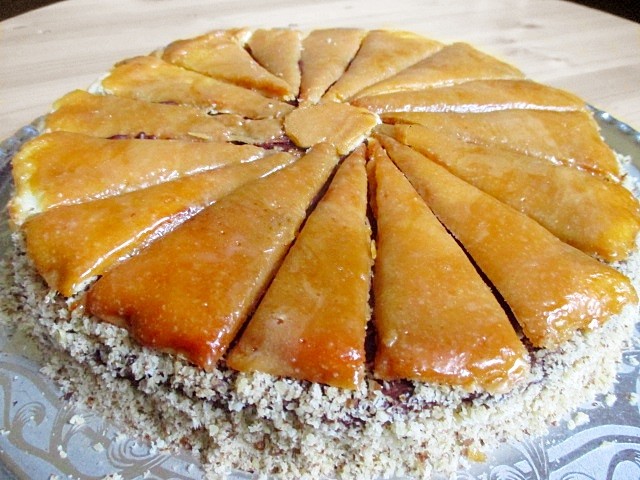 Ingredients:
For the cake:

Separate the eggs. Beat the egg whites with half of the sugar until stiff peaks form. Beat the egg yolks with the remaining sugar. Gradually add flour to the yolk mixture. Stir some beaten egg whites into the batter to loosen it, then gently fold in the remaining whites. Place the batter in the three prepared cake pans. Bake them for 6-8 minutes or until light golden. Remove cakes from the oven, peel off paper and transfer onto a wire rack to let them cool completely. Cut each cake into 2 layers.

Melt the dark chocolate in the microwave oven or over boiling water and set aside. Place 4 eggs, vanilla seeds, icing sugar and rum in a metal bowl and over a pot of boiling water cook while whisking continuously until it thickens. Don’t overcook, or eggs will scramble. Remove from the heat and whisk until the cream cools. Add melted chocolate, two tablespoons of cocoa powder and soft butter, and stir until fully incorporated.
Sandwich 5 cake layers (the 6th layer will be topped with caramel) and also cover top and sides of the cake with the cream. Coat the sides with ground walnut. Place in the fridge.

Cut the 6th cake layer into 12- 16 equal parts, and put them close together. Melt butter in a saucepan, stir in sugar and cook until sugar melts and becomes golden brown. Pour on top of the cake pieces and spread evenly. With a sharp knife or a pizza cutter score the caramel to separate the tops before the caramel fully sets. Let the tops cool completely. Place them on top of the torte and chill. 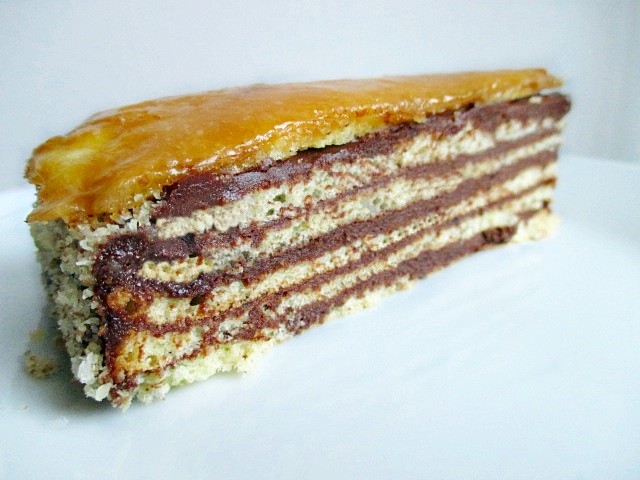