This bread pudding is actually the summer version of the well known mákos guba. It’s similarly made with stale crescents soaked in vanilla custard. Instead of poppy seeds, however, I use ground walnuts and add pitted sour cherries to make this dessert fresh. The pudding is topped with a thick layer of whipped egg whites, which is combined with a tablespoon of sour cherry jam (feel free to substitute it for any other jam). 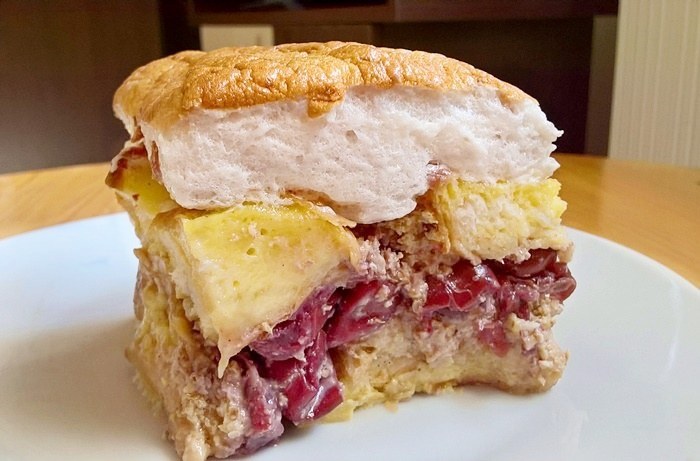 Slice the crescents and place them in a metal bowl.

In a sauce pan whip the egg yolks with sugar and vanilla until pale. Gradually add milk and whisk until well combined. Over medium heat cook until the custard thickens just a little (it should remain liquid), but don’t boil it. Pour the hot custard over the crescent slices and let them soak.

Preheat the oven to 180°C / 356°F. Butter an ovenproof dish and put half of the crescents in it. Scatter ground walnuts and sour cherries on top. Cover with the remaining crescent slices. Bake for 15 minutes.

In the meantime whip the egg whites with sugar until stiff peaks form. Gently fold in a tablespoon of sour cherry jam. Remove the bread pudding from the oven and spread the whipped egg whites on top. Put back into the oven and bake for further 8-10 minutes or until golden brown.