Slambuc is an old Hungarian pastoral dish, which is made with bacon, noodles and potatoes. It’s cooked in bogrács, if not, it can’t be called slambuc. It originates from Hajdú-Bihar county, it was likely to be prepared for the first time in the Hortobágy. Similar dishes are cooked in other parts of the country, too, but they are prepared and named differently.

Shepherds neither stirred nor shaked, but turned over slambuc 32 times by moving the bogrács in a special way. They counted the turns by stacking the 32 Hungarian cards one by one onto each other. When the cards ran out, slambuc was done.

The noodles are so called lebbencstészta, which is a homemade pastry rolled out until paperthin, dried and broken into bite-size pieces. Lebbencs noodles are made from egg and flour, the egg-flour portion is 1 egg/100 g of all-purpose flour, that has to be kneaded into a homogenous and rollable dough. 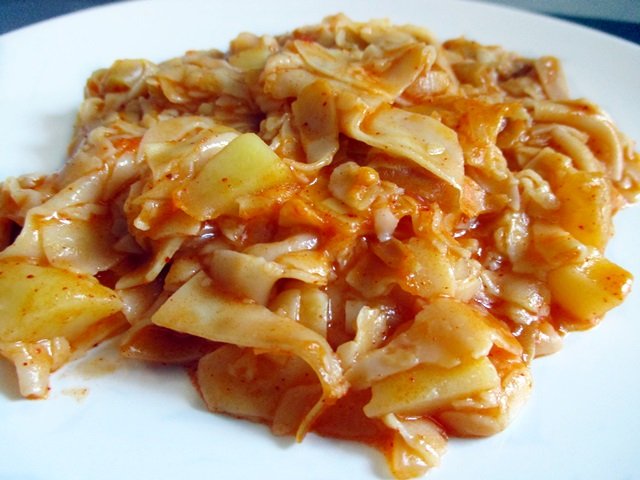 Fry the bacon, when it releases enough lard, add the noodles and fry until golden brown.

Add finely chopped onion, stir to well combine and fry for a few seconds. Pour in water, just enough to cover the food.

Add potatoes, pepper and tomato slices, then sprinkle with salt and paprika.

Stir or shake frequently, in the meantime, if necessary, add more water. The less liquid there is in the bogrács, the more often you need to stir (or shake) in order to avoid burning.

Cook until potatoes and noodles are soft and water absorbed. 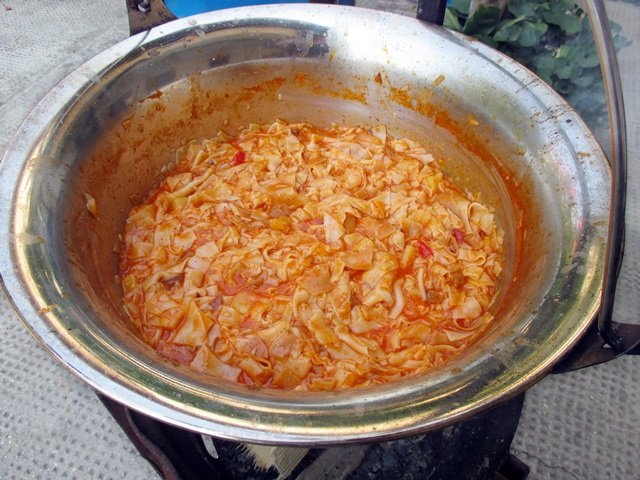