Although Bryndzové halusky or sztrapacska is actually a Slovak dish, the recipe can’t be omitted from my list. The Slovaks are the third largest minority in Hungary, according to the estimates of minority organisations, there are about 100,000-110,000 people with Slovak ancestry. Most of them live around the hills of Pilis and in Békés County. Their cultural center is Békéscsaba where the Slovak consulate can be found, too. The Slovaks have endeared sztrapacska to us Hungarians and we often cook them.

Halusky are potato dumplings whose batter is similar to Hungarian nokedli. The sole difference is that it contains grated potatoes. They can be topped with bryndza, sauerkraut, meat, bacon, caramelized onions, or simply used as a side dish.  If you mix the dumplings with Bryndza, you get the Slovak national speciality.

Bryndza is a sheep milk cheese made mainly in Slovakia, Romania and Moldova. It’s generally said to have been developed by Slovaks, but the truth is that the first bryndza was made by Vlach shepherds in Transylvania who took the cheese’s recipe to Upper Hungary in the 14th century. The cheese is white, creamy, crumbly and slightly moist. It’s known for its characteristic strong smell and taste. As you can see in the recipe, I add no more than 1 teaspoon of salt to the batter because bryndza is very salty. 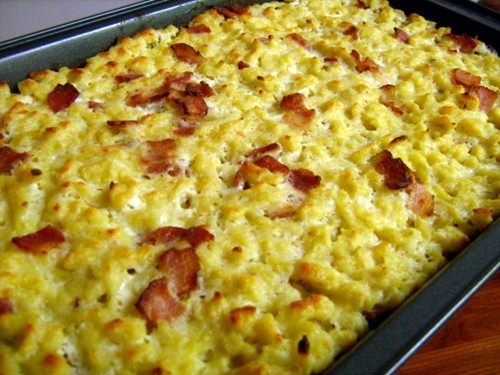 Peel the potatoes and grate them using the small-hole shredder of a box grater.
Place flour in a large bowl, add shredded potatoes, eggs, salt and pepper, then pour in water to combine the ingredients. The batter should be thick and smooth.
Push the batter through a dumpling maker into a large pot of boiling water. Or you can use a kitchen knife and a cutting board to make dumplings and drop them into the water.
Cook for 3-4 minutes, then strain the dumplings. Set aside.
Cut the bacon into small squares and fry them until crispy.
Put bryndza in a bowl, grate the garlic cloves in it. Add sour cream and bacon, pour in the rendered bacon fat, too. Mix them up.
Stir the dumplings in the mixture. Spoon in a greased roasting dish and bake at 220°C / 428°F for 15 minutes until top becomes golden brown.
Serve immediately.
Mentés