Pásztortarhonya is a typical Hungarian one-pot meal, a great and filling legacy of old times. Hungarians’ ancestors were stock-breeder and they lived a nomadic life; therefore, they were forced to cook simple, but substantial dishes. Sheperds prepared the meals in bogrács (Hungarian kettle) over an open fire, in lack of a fully equipped kitchen there was neither time nor possibility to make a fuss about “gastronomy”, they ate what they had at hand. Sheperd’s noodles are gorgeous example of effective cooking and sober practicality.

Tarhonya is a Hungarian egg noodle, mentioned already in 16th-century handwritten Hungarian cookbooks. It  originates presumably from Persia and appeared in Hungary during the era of the Ottoman-Turkish empire. The noodles are as small as a grain of barley, I think this is the reason why it’s called egg barley in English.
Tarhonya is made from wheat flour, whole eggs and salt, mixed together and kneaded into a smooth dough. The dough is pushed through a special riddle, so noodles gain their round shape. The grains are dried out on trays and stored in paper or cloth bag . They are served with meat or vegetable stews, egg dishes, roasted poultry, fried sausages, or in salads.

As opposed to other pastas, tarhonya’s cooking time is much longer than usual, it needs at least 50-60 minutes to soften completely. Furthermore, tarhonya is always toasted in butter or lard before braising, so it obtains its characteristic flavour that can be compared to nothing. 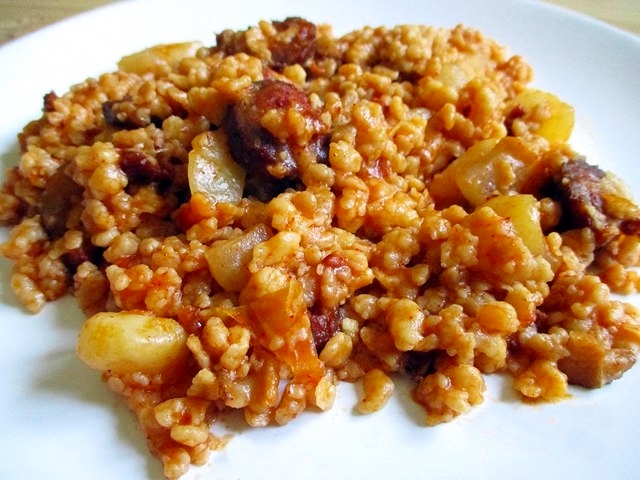 In a sauté pan fry the chopped bacon. When it releases enough lard, add sliced, smoked sausage and tarhonya to fry them together for 2-3 minutes until noodles turn very light brown. Add finely chopped onion, stir and let it cook for 1-2 minutes. Pour in one and a half liter of water, season with paprika and salt, add tomato, wax pepper and potato cubes. Cover the pan and cook until tarhonya becomes soft (it takes about 1 hour). Stir frequently, if liquid boils away, add more water. Serve immediately.