Langalló, kenyérlángos, töki pompos, Scythian pizza – they all are the names of an old Hungarian food. Langalló is a flat bread, similar to the traditional Italian pizza, but instead of tomato sauce it’s topped with sour cream, bacon, sausage, onion and cheese.

A long time ago bread baking was a weekly routine in every Hungarian family, and housewives baked not only loaves, but they often separated a small ball from the bread dough to make langalló for breakfast. Topping always depended on what was found in the pantry. It was baked together with the breads in a rick-shaped oven, which was an integral part of every house. But home bread baking fell victim to the modernization, and langalló also sank into oblivion for a while until some handicraft bakeries began to offer langalló 10-15 years ago. Nowadays there is no festival or fair without this flat bread.

Langalló’s dough is originally rolled out into 25 cm circles, but today’s ovens are much smaller than the rick-shaped ovens of bygone days, so due to lack of space there is a widespread practice to roll out the dough to the size of a big baking sheet instead of forming it into separate circles. This time I decided to form balls and roll them into circles, but you can choose the simpler solution as well, although in this case the crust will be thicker. 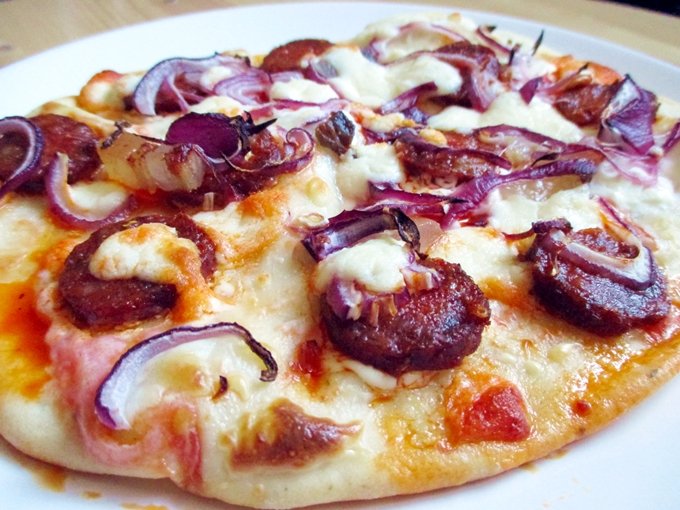 Place yeast, sugar, one tablespoon of flour and 100 ml (~1/2 cup) of lukewarm water in a small bowl and let it rest until it dissolves.

Sift the remaining flour in a separate bowl, add salt, activated yeast and the rest of the lukewarm water, and with a hand mixer knead until the dough starts to hold together. Keep on kneading while gradually pouring in the melted lard. The dough is ready when a smooth ball forms. Cover with a kitchen towel and let it triple in size.

Divide the dough into six equal parts, form balls, cover and let them rise for 10 minutes. Roll them out into circles with a diameter of 20-25 cm. You can choose if you pre-bake the bases in the oven pre-heated to 200°C / 392°F or lay them one by one in a dry frying pan that has been on a high heat and toast their both sides for 2-2 minutes on the gas stove.

When the circles are pre-baked, spread a thin layer of sour cream over the top, add sausage slices, bacon, thinly sliced red onion and cheese. Place the “pizzas” on baking sheets lined with parchment paper, slide them into the oven and bake them for 10 minutes. When the cheese melts and the crust takes on some colour, langalló is ready to go. Eat fast!