Pozsony is the Hungarian name for Bratislava, the capital of Slovakia, the hometown of these amazing crescents. Pozsony crescents can be considered as the small version of beigli, which are known under different names: their Slovak name is Bratislavský rožok, Pressburger Kipfel in German, and in Hungary they’re called pozsonyi kifli. The story of Pozsony crescents dates back to the 17th century, when the expression Gipfel (kifli) was born in Austria.

After the defeat of the Ottomans who unsuccessfully tried to occupy Vienna in 1683, an Austrian baker called  Wendler decided to celebrate the victory by giving people the Turkish half-moon (symbol of their flag) to eat as a compensation for the starving during the siege. So he launched a crescent shaped cookie, which he gave the name of Gipfel to.

Later, during the era of the Austro-Hungarian Empire a lot of Austrian and German bakers went to Pozsony, who brought along the recipe of beigli. Bakers kept the basic recipe, they just reduced the size of the rolls and formed crescents, which were perfect gifts for children. One of the bakers coming to Bratislava was a descendant of Wendler, and he gave the name Kipfel to the pastry. At the turn of the 19th and 20th century, it was Gustáv Wendler, one of the famous bakers of Pozsony, who made the best Pozsonyi kifli, and even sent his pastry by post to Vienna, Budapest and Paris.

In order to be able to distinguish the walnut and poppy seed fillings, bakers came up with the idea to form the pastries in different shapes. Crescents with poppy seed fillings are horseshoe shaped, while walnut filled pastries are always bent into the shape of letter C. 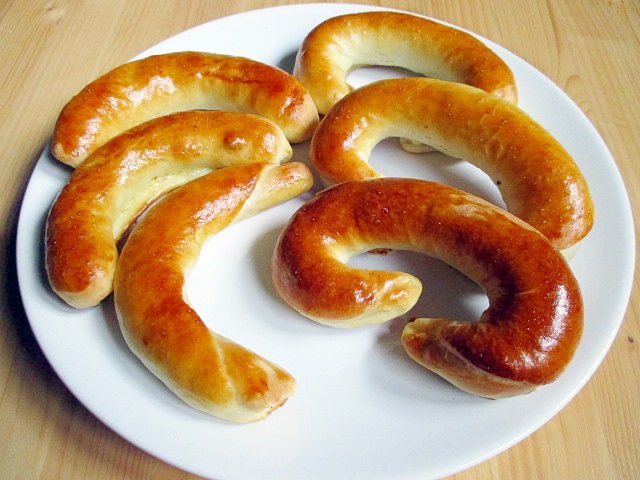 For the walnut filling:

For the poppy seed filling:

For the egg wash:

Dissolve yeast with a teaspoon of sugar in lukewarm milk. Rub lard into the flour. Add activated yeast, egg, salt, sugar and sour cream, and knead the dough until just smooth. Cover with a clean kitchen towel and let it rest for 50 minutes or until it triples in size.

Meanwhile prepare the fillings. Add cinnamon and lemon zest to the milk, bring it to a boil. Add ground walnuts and sugar, and , while stirring constantly, cook for a minute until thick. Repeat the process with the ground poppy seeds, too. Let the fillings cool completely.

Turn out the dough onto a floured surface. Divide it into two equal parts, and form 16-16 balls. Flatten the dough balls, slightly stretching the two ends, and roll them into ovals. Divide the fillings into 16-16  portions and place them on the edge of each ovals. Roll them up tight and pinch the ends. Roll them again with your hand to stretch and make them even. Form the poppy seed pastries into crescents, while walnut rolls have to bent into the shape of letter C. 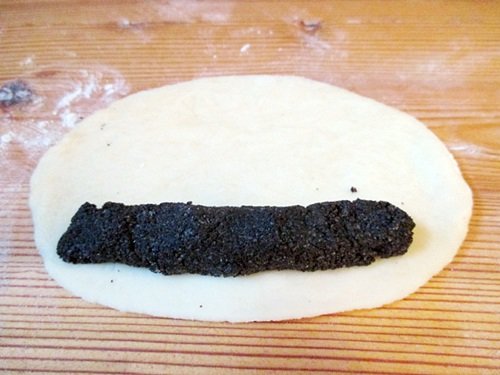 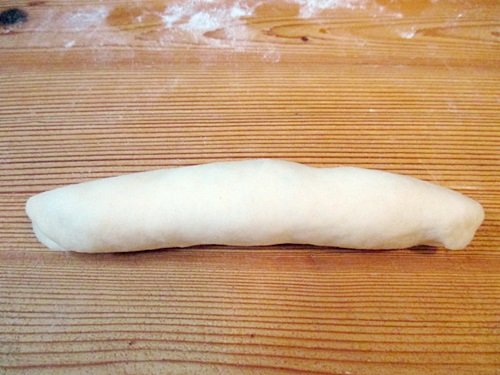