As I mentioned in the previous post, Henrik Kugler was the renowned confectioner of Budapest in the 19th century. The cream of the Hungarian aristocracy, as well as artists, writers spent the afternoons in his coffee house, and it was also popular among the foreigners. He often traveled to Paris to get to know new recipes and expand the selection.

The Kugler Cake was one of the confectionery’s most famous and popular cakes. This more than 100 year old recipe also meets the requirements of our modern age, since it doesn’t contain flour. 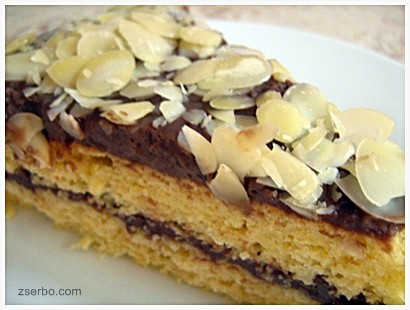 In a medium bowl whisk egg yolks and sugar together, then add ground almonds and breadcrumbs and mix them until thoroughly combined.

In another bowl beat egg whites until you get stiff peaks.

Pour the batter into the tin.

Bake for about 30 minutes until a needle comes out clean.

Run a knife around the edge of the tin. Allow to cool it before removing the rim.

When cool, split into two layers.

Put the chopped dark chocolate into a saucepan, add sugar and vanilla seeds, then pour in water. Melt it slowly over low heat while stirring frequently until it becomes completely smooth.

When the chocolate cooled,  whip it with the soft butter by using an electric whisk.

Spread the bottom layer with 2/3 of the cream, cover with the other layer, then take the remaining cream to spread it onto the top and sides of the cake.

Decorate the top with grated chocolate or sliced almonds.