Bugac is a village in the Southern Great Plain region surrounded by the puszta, which is the largest of seven detached units making up the Kiskunság National Park. Although Bugac is a part of the Great Hungarian Plain, the village has a unique landscape. The quality of the soil is very poor in this area, and due to the lack of vegetation strong winds formed sand dunes around the village.

In the 18th century Maria Theresa ordained to stop the erosion by afforestation. Bugac is now surrounded by forests that cover the sand dunes. A whole range of natural beauty can be found in the Bugac area such as the highly protected native juniper grove, sand dune forests and sand plains, marshes, bogs, boggy meadows, wet grasslands, sodic lakes and sodic plains. The forests of junipers and poplars also provide space for several rare species of plants and animals.

This ragout is a sort of tokány enriched with green peas, and flavoured with sour cream and mustard. As you can see, salt is not listed among the ingredients because bacon and paprika cream are salty, so the dish doesn’t require additional salt. But if you would like to add more, taste the meal before seasoning. 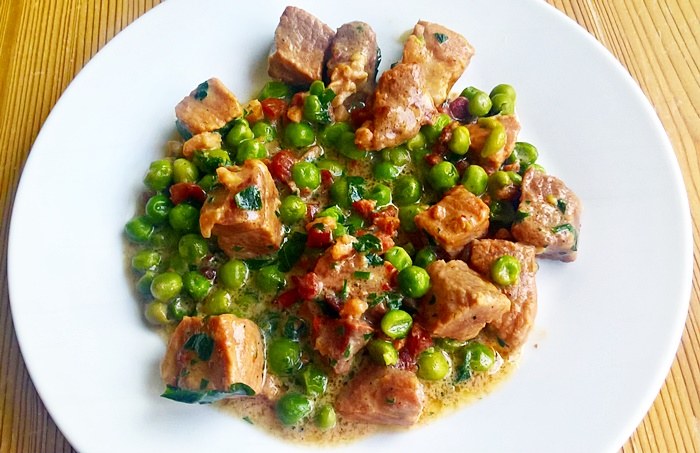 Dice bacon and pork, chop the onion. Heat lard in a pan, add bacon and fry until crispy. Stir in finely chopped onion and sauté until translucent. Add the pork and cook until all sides turn white. Sprinkle with black pepper, pour in a half cup of water, cover and cook slowly. Add more water as required.

Once the meat is almost tender, add green peas, mustard, sour cream and paprika cream, and cook until it’s done. Turn off the heat and sprinkle with finely chopped parsley. Serve with steamed rice.
Important: since bacon and paprika cream are salty, handle salt carefully. First taste, then salt if needed.