This cabbage soup is my mother’s speciality, I even venture to say that no one cooks it in the same way in Hungary. The widespread version prepared in many households is the Frankfurter soup that is made with kale and virsli (Vienna sausage). My Dad has unpleasant memories of kale from the time when he served in the army, and he is unwilling to eat this vegetable. So, my Mom created this recipe more than 30 years ago; that year a lot of white cabbages grew in our garden and she decided to try to make a soup. It was an overwhelming success and since then this soup has been on the menu in my family. 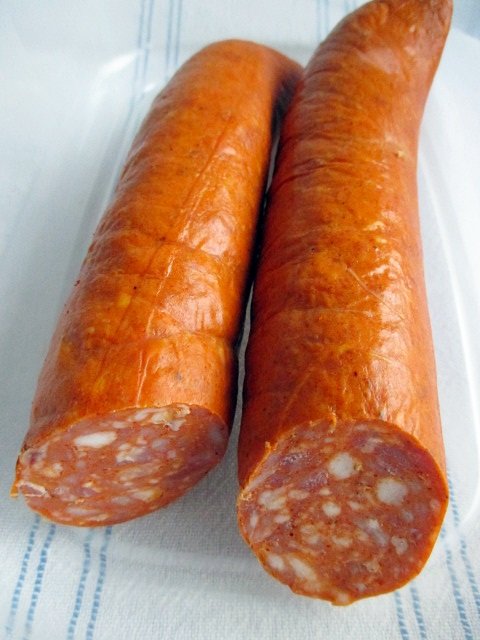 Instead of Vienna sausage we use letcho sausage. It’s not easy to find lecsókolbász of good quality, but not impossible. In this case stores, supermarkets are out of question (store-bought letcho sausages are nearly unfit for human consumption), the only acceptable choice is local butchers who make their own letcho sausage by carefully selecting the basic materials and spices, and don’t consider this product as a mass of slaughterhouse wastes. Letcho sausage is lightly spiced and smoked, and it contains a little paprika, which is released during the cooking process and it gives a light pink shade to the soup. 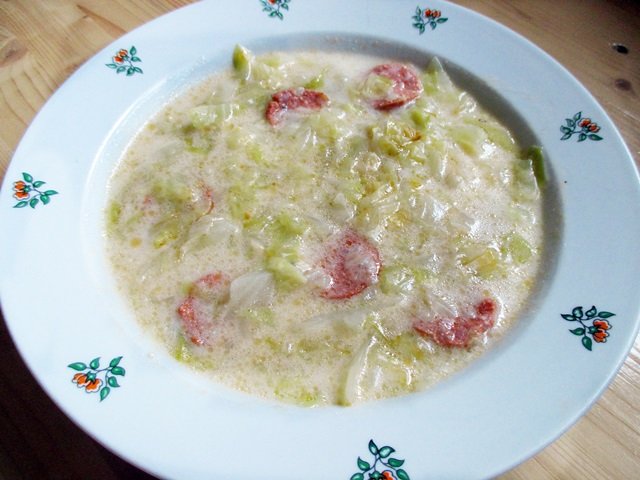 In a heavy pot heat up the lard, add flour and finely chopped onion, and make a blonde onion roux. Pour in water, add thinly sliced cabbage and caraway seeds. Salt and pepper, season with tarragon. Bring it to a boil, stirring frequently, and cook over medium heat. When the cabbage is almost done, add sliced sausages. Cook until the cabbage is soft. Turn off the heat. Place sour cream in a small bowl, ladle some soup in it and whisk to combine. In a fine stream pour the mixture into the soup while stirring constantly.