Potato is an essential crop in Hungary, it’s an integral part of our food supply. Potatoes were domesticated in the Andes approximately 7,000–10,000 years ago, but they were introduced outside the Andes only about five centuries ago. It is the world’s fourth-largest food crop, following maize, wheat, and rice, and there are now over a thousand different types of potatoes worldwide.

There are uncountable potato dishes in the Hungarian cuisine, which prove that this starchy, tuberous crop is an important commodity of everyday life. 85% of the crop can be used for human consumption, compared to 50% utilization of cereals. Despite that potato is classified as high on the glycemic index and excluded, therefore, from the diets of those who follow a low-GI diet, it’s a healthy food since it contains many vitamins and minerals, as well as, carotenoids and natural phenols.

Potatoes can be prepared in many ways: skin-on or peeled, whole or cut up, with seasonings or without. In Hungary soup is one of the most popular preparation methods. Potato soup is a substantial dish that can serve as a pick-me-up on cold days.

The taste of the following soup is very characteristic, that consists of 4 main elements. Brown (but not burnt) roux is the key part that defines the basic flavour, bay leaf and celery or celeriac root make the fine tuning, and at last sausage gives a smoky shade to the soup. I personally like to add a dash of white wine vinegar, but if you don’t favour  sourish taste, you may omit it. 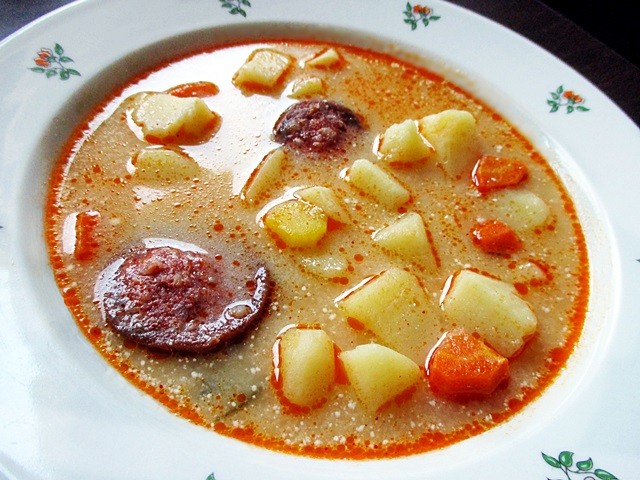 Heat up the lard, add two heaping tablespoons of flour and make a brown roux. Remove from the heat, sprinkle  paprika on the roux and pour in 1,5-2 l (6-8 cups) of water while stirring constantly.

Return to the heat, add diced potatoes, carrots, parsley and celeriac or chopped celery leaves, bay leaf, season with salt and pepper. Bring it to a boil – stir frequently – and cook over medium heat.

When the vegetables are half-cooked, add sliced smoked sausages and cook until tender.

Turn off the heat. Put the sour cream in a bowl, ladle some soup and whisk to combine. In a fine stream pour the mixture into the soup while stirring continuously.

Flavour the soup with a dash of white wine vinegar.