Mushrooms have long been celebrated as a source of powerful nutrients, they are known as the “meat” of the vegetable world. Mushrooms are a low-calorie food rich in B vitamins and  essential minerals such as selenium and copper.

If you pick wild mushrooms, you have to take some protective measures in order to avoid poisoning yourself. Collect only known and identified species. Take two collecting baskets: put mushrooms positively identified as edible in one. Put mushrooms you are uncertain about in the other. And the most important: ask a properly qualified and trained specialist to check your entire harvest before you eat any.

This time I used scaly wood mushrooms, but any other mushrooms such as Scotch bonnet or King Bolete (or even cultivated species) can be a perfect base of a hearty, tasty soup. To prepare the mushrooms, just use a dry paper towel to wipe off any dirt you see. Don’t run mushrooms under water, as they are very porous and will absorb the water, which keeps them from developing their flavor completely. 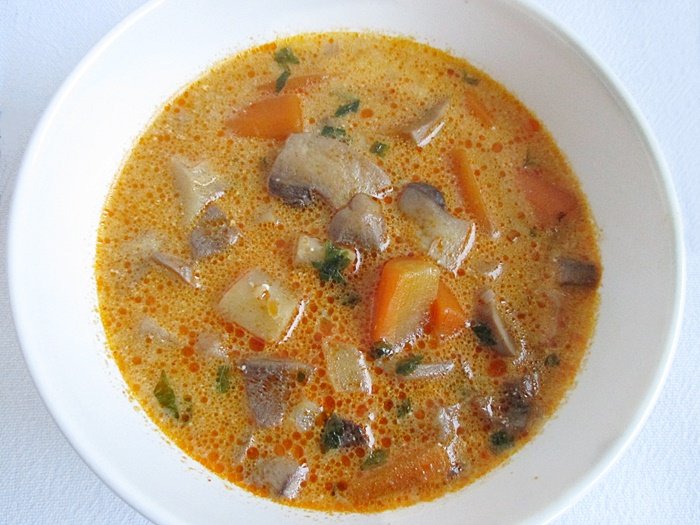 Sauté finely chopped onions in lard until translucent. Add chopped mushrooms, diced carrots and parsley roots and give it a stir. Pour in 1/2 cup of water, cover the pot and over braise for a couple of minutes until liquid boils away. Sprinkle the vegetables with flour, add paprika and pour in 5 cups of water. Bring it to a boil while stirring constantly. Salt,  add rice and over medium heat cook until tender. Once it’s done, turn off the heat. In a small bowl combine sour cream and a ladle of hot soup, then pour the mixture into the soup. Finally sprinkle the soup with finely chopped parsley.