Lecsó is a simple stew of glorious vegetables, the perfect example of a dish that is truly way grander than the sum of its ingredients. The traditional lecsó consists of only 3 ingredients: onion, wax peppers and tomatoes. But with a little imagination, there are endless possibilities: make it ratatouille-style with zucchini or eggplant; toss it with pasta, scrambled eggs or rice; serve it alongside roasted or grilled meats; or eat it straight from the fridge as a snack.

One of the popular lecsó versions is combined with toasted egg barley, which makes the dish hearty and more flavourful. As egg barley takes 40-50 minutes to get soft, it’s recommended to prepare it first, lecsó needs only 25-30 minutes to be done.

Regarding tomatoes the eternal question is to peel or not to peel. Personally, I don’t mind tiny chunks of skin in lecsó, and – let’s be honest- peeling tomatoes is annoying and time consuming. The other reason I don’t remove tomato skin is that it’s rich in flavonols, which are a kind of plant-based antioxidant. They reduce the risk of cancer, cardiovascular disease, and other age-related complications. So keeping your tomato intact will increase its nutritional value. 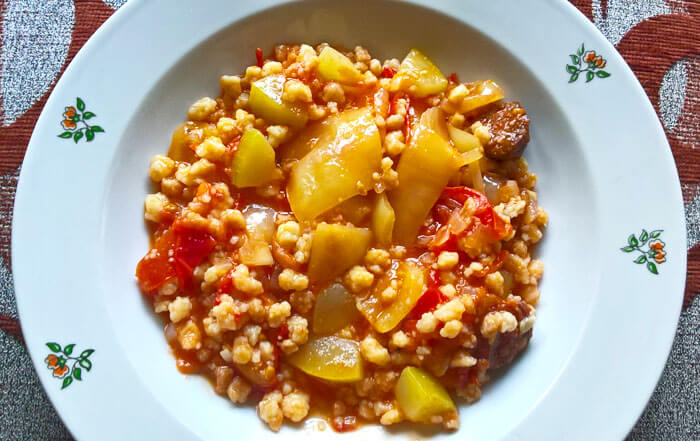 In a pot heat 1 tablespoon of lard and toast egg barley until golden brown. Pour in 1 liter (~4 cups) of water, add 1/2 teaspoon of salt and cook while stirring frequently until tender. Egg barley absorbs a lot of water to get tender, so you need to add more water while cooking, the total amount of water will be about 1,5-2 liters (~6-8 cups) depending on the noodles’ quality.

The next step is to prepare the vegetables for the lecsó. Chop tomatoes while removing the green center. Core, seed and slice wax peppers. Chop the onions. Peel, seed and dice the courgette. In a separate pot heat 1 tablespoon of lard, add chopped onions and sauté until translucent.

Add wax peppers and courgettes and fry until softened, but not cooked through. Stir in tomatoes, 1 teaspoon of salt and a 1/4 teaspoon of black pepper. Add sliced sausages, reduce heat to medium-low and cook until vegetables are tender but not mushy, approx. 15 minutes. Once it’s ready, turn off the heat and mix up lecsó and egg barley. Serve immediately.