In Hungary most people choose some kind of bakery product for breakfast, salty crescent or sós kifli is among the most popular ones. Salty crescents can bring on nostalgia, especially the members of the older generation  often think of kifli as a memory of old times. Nowadays hundreds of freshly baked products are put in order on the shelves of the stores, but the bakeries of the ’50s and ’60s Hungary didn’t supply such a wide range. Beside bread, zsemle and kifli (normal and salty) were usually baked for everday consumption.

The word kifli refers to its shape. Kifli is made from yeasted dough and shaped into a thin crescent. Its dough is firm and pliable at the same time. Kifli should be crunchy when you bite into, but also soft on inside. To have the right consistency of dough (firm, but not stiff), you have to measure out all the ingredients exactly. The aim of adding vinegar is to make the dough more pliable.

Salty crescent is often eaten with butter, or filled with ham or slices of smoked sausages, but it’s also perfect in itself served with a hot cup of cocoa. To me, kifli spread with sheep milk cheese and hot green pepper slices layed on it is the earthly incarnation of heavenly joys. 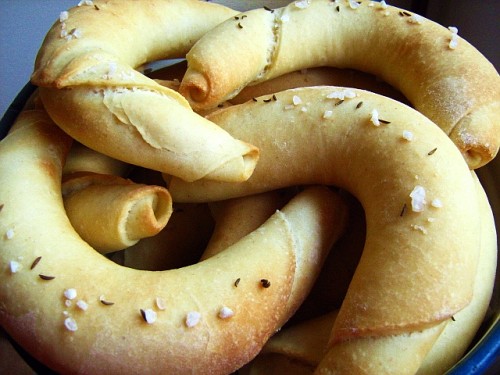 Activate the fresh yeast with sugar and 100 ml of lukewarm milk.
In a large bowl measure out the flour.
Whisk together salt and flour.
Add the oil, vinegar, lukewarm milk and finally the dissolved yeast.
Kneed the dough until smooth and elastic.
Shape the dough into a ball, cover the bowl and put it into a warm place.
Let the dough rise until it doubles in size.
When the dough has doubled in size, divide it into 12 equal balls.
Roll them out one by one into a square shape on a floured pastry board.
Turn the square on its end.
Stretch out the farthest corner with the rolling pin.
Roll it up starting from the bottom and curve it into a crescent.
Place it on a baking sheet lined with parchment paper.
Repeat the same procedure with the rest of the squares.
Let the crescents rise until they double in size.
Preheat the oven to 220°C / 428°F.
Brush the tops with water.
Sprinkle with salt and caraway seeds.
Spray a little water in the baking sheet, so crescents will bake in steam.
Place the crescents in the oven and bake for 5 minutes, then reduce the heat to 200 °C and bake for 15 minutes or until golden brown.