Though Kaiserschmarrn is basically an Austrian dessert, but due to the years our country spent in the Austro-Hungarian Monarchy it has been tightly integrated into the Hungarian cuisine, as well. Kaiserschmarrn translates in English as the Emperor’s Mess, it’s actually a shredded pancake, which has its name from the Austrian emperor Franz Joseph I, who was fond of this terrific dessert. In Hungary császármorzsa (this is how Kaiserschmarrn is called in Hungarian) isn’t only served as a dessert but also as a main course, for example after a thick soup.

Kaiserschmarrn can be prepared in different ways. The basic ingredients are sugar, flour, eggs, milk and salt; we Hungarians often use semolina or a mixture of flour and semolina. Egg whites are usually separated from the yolk, beaten until stiff and folded into the batter. The batter can be fried on the stove or baked in the oven. The pancake is torn into small pieces with a fork or wooden spoon while frying. You can vary the recipe at your pleasure, you just have to keep the proportions of dry and moist ingredients as the batter has to be liquid, but viscous. 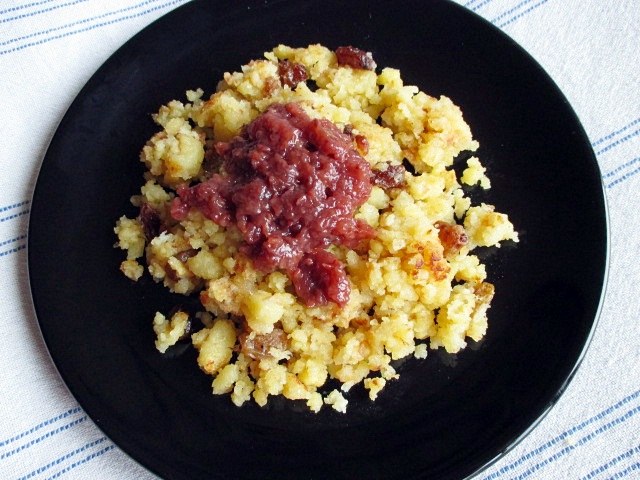 Add vanilla to the milk and heat it. Mix semolina, flour, sugar, butter and lemon zest in a bowl. Separate the eggs, add the yolks to the mass and whisk until incorporated. Pour in the warm vanilla milk and whisk to combine. Add a pinch of salt to the egg whites and beat until thoroughly stiff. Finally gently fold the beaten egg whites into the semolina mixture.

Put 3 tablespoons of butter into a frying pan and warm over medium heat until it completely melts. Once the butter has melt and the pan is hot enough, pour in the batter and sprinkle one handful of raisins over it. Fry until the bottom is golden brown, then try to turn the pancake – never mind if it breaks. Tear it into small pieces and fry it properly until golden brown. Serve hot with fruit jam.